HOUSTON—Delegates here adopted a resolution that calls for developing in-depth guidelines for cooperative social ministry work on the local, national and international levels between The Lutheran Church—Missouri Synod and other church bodies, including the Evangelical Lutheran Church in America (ELCA). 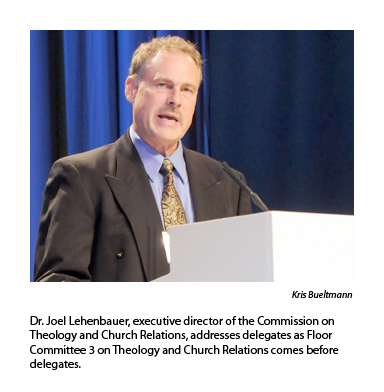 Proposed by the Floor Committee on Theology and Church Relations (Committee 3), Resolution 3-03 was adopted by a vote of 961 to 175.  It asks the Commission on Theology and Church Relations (CTCR), in consultation with the praesidium, to develop more in-depth theological criteria for assessing cooperative efforts between LCMS social ministry entities and other church bodies, and to determine what actions would necessitate the termination of those efforts.  It also asks that the praesidium, in consultation with the CTCR, provide an assessment of the current state of cooperation in externals and a full report of criteria for ongoing assessment.  The resolution was amended to move the deadline for the praesidium’s report from the next convention in 2013 to July 13, 2011.

The action was taken at the 64th Regular Convention of The Lutheran Church—Missouri Synod meeting July 10-17 at the George R. Brown Convention Center under the theme “ONE People—Forgiven.”  Among the approximately 3,000 participants are some 1,200 clergy and lay voting delegates.  Debate on the resolution focused on balancing cooperative efforts to meet the physical needs of people without compromising the theological integrity of the Synod.

CTCR Executive Director Dr. Joel Lehenbauer referred delegates to five questions contained in the resolution in determining that balance between the LCMS and the ELCA:

1. Is the purpose of the joint work fully consistent with the positions, policies and objectives of the Synod?

2. Do cooperative efforts imply doctrinal unity with the ELCA or endorsement of ELCA positions on same-sex relationships or other matters of disagreement with the LCMS?

3. Does the joint agency or organization distinguish itself as an entity from the churches that support it?

4. Are all the policies and programs of the organization consonant with the doctrinal position of the LCMS?

5. Do the individuals who lead the organization openly support and encourage efforts, positions or policies which compromise the theological stance of the Synod?

Rev. John Nunes, president and chief executive officer of Lutheran World Relief, Baltimore, said that in his experience at the inter-Lutheran agency, the ELCA has not “imposed on the confession of faith of any LCMS member.”  He told delegates there would be “huge stewardship implications” if ties with the ELCA on inter-Lutheran human care activities were severed.  “Consider the cost and benefits of any action you take,” he said.  “Our faith calls us to respond to our neighbor in need, and to do so efficiently and effectively.”

Rev. David Speers, a delegate from the Central Illinois District, said that joint endeavors with the ELCA “are giving a witness to many Christians as a black mark on our confession.  How far do they [the ELCA] have to move before we say we can’t work with them?”

The resolution follows up on two previously adopted resolutions from the committee, which commended for “study and reference” two statements relating to the ELCA’s stance on human sexuality and urged support for confessional Lutheranism.