HOUSTON—With “yes” tallies of 79.9 percent and 83.5 percent of the votes, delegates at the Missouri Synod convention encouraged the work of the Task Force on Synodical Harmony and affirmed ecclesiastical supervision in the cases of rostered church workers  following the advice of their supervisors. 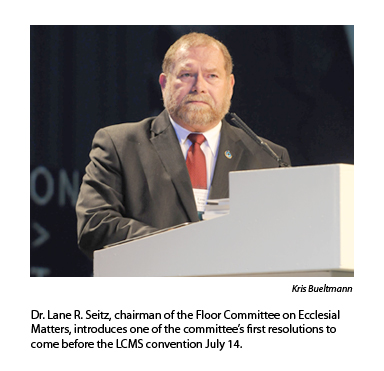 Those were the topics of Resolutions 7-01 and 7-02, respectively, that the Floor Committee on Ecclessial Matters (Committee 7) put before the convention when it first took the podium July 14.  In all, the committee has drafted nine resolutions for this year’s convention.

The 64th Regular Convention of The Lutheran Church—Missouri Synod is meeting July 10-17 at the George R. Brown Convention Center under the theme “ONE People—Forgiven.” Among the approximately 3,000 participants are some 1,200 clergy and lay voting delegates.

The Synod Board of Directors and Council of Presidents formed the 12-member harmony task force after the 2007 Synod convention mandated a “specific plan to restore harmony in our Synod for the sake of the whole church,” states a “whereas” of the 2010 resolution.

The task force issued a progress report for this convention.

Delegates gave the resolution less than 10 minutes of debate before adopting it by a vote of 799-254.  Its three “resolveds” direct that:

Resolution 7-02, “To affirm ecclesiastical supervision,” was adopted by a vote of 958-189. After a substitute motion was defeated, the resolution was adopted with two minor word changes the committee accepted as “friendly” amendments.

The action responds to numerous convention overtures that request overruling certain official opinions issued by the LCMS Commission on Constitutional Matters (CCM). The commission’s opinions pertain to ecclesiastical supervision and expulsion of a member who, when performing official duties, follows the advice and counsel of his or her designated ecclesiastical supervisor.

Noting that the convention “honors the genuine concern expressed by individuals, congregations, circuits and districts of the Synod regarding the CCM opinions in question and desires to resolve this matter in a responsible and God-pleasing fashion,” the resolution’s “resolveds” state that the Synod affirms:

Dr. Lane Seitz, chairman of Floor Committee 7, told delegates as discussion began that the committee wished to read a report it drafted to go along with the resolution “because of the gravity of the matter and [because] it has been under contention for some time,” including resolutions of district conventions and of the past three Synod conventions — including this 2010 convention.

After two delegates asked separately if the resolution had a direct connection to any specific situation to which ecclesiastical supervision might apply, floor committee members stated that it did not.

“This has been a thorn in the flesh of our Synod for a while,” said Dr. Charles S. Mueller Jr., a clergy voting delegate from Bloomingdale, Ill., who urged the convention to adopt the resolution and “put it to rest.”