HOUSTON—Delegates began their work here July 12 by adopting four proposals on Synod Structure and Governance (Floor Committee 8), including a sweeping proposal that reduced the Synod’s seven program boards to two elected policy boards.  The delegates also favored — but fell short of the required two-thirds approval — an amendment to the Synod constitution to move from a three-year cycle to a four-year cycle for district and national conventions. 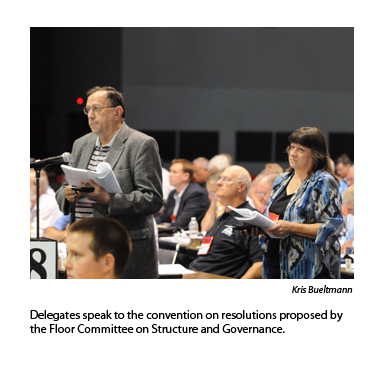 Delegates began the day’s work by voting to dispense with a planned question-and-answer session on the restructuring and governance proposals, a carryover from convention activities on July 11.  Instead, they opted to move ahead with debate and voting.

Delegates acted on five restructuring and governance resolutions during the morning session:

Before the morning concluded, delegates began consideration of a resolution to elect five vice presidents by geographic region and a proposal to make it possible for every congregation to participate in the election of the Synod president.