HOUSTON—The Lutheran Church—Missouri Synod (LCMS) must adjust outreach or ministry models “if, when or where it’s necessary to do so,” for the sake of the Gospel to reach millions of people in the United States and billions around the world who do not know the name of Christ, said Dr. Gerald B. Kieschnick, president of the Synod. 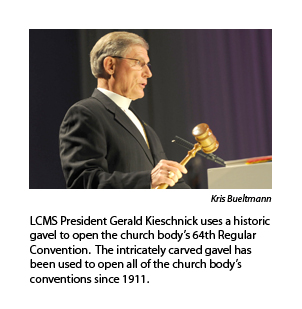 Kieschnick addressed the 64th Regular Convention of The Lutheran Church—Missouri Synod, meeting July 10-17 at the George R. Brown Convention Center under the theme “ONE People—Forgiven.” Among the approximately 3,000 participants are 1,218 clergy and lay voting delegates.

“Never before in the 163-year history of The Lutheran Church—Missouri Synod have there been so many opportunities, blessed by God, to reach the world for Christ. Achieving our full potential in what God has called us to do will require that we come to grips with the challenges ahead,” Kieschnick said.

During his first term in office, Kieschnick said he had made the remark, “This is not your grandfather’s church.”  Some were troubled by the comment, he said, saying it suggested LCMS members should turn their backs on the past, or that it insulted the heritage and traditions of the Synod.  “Nothing could be further from the truth,” the LCMS president said.

He said many of the things his grandparents experienced — such as prayer in public schools and wide respect for Christianity — have changed.  In the midst of those changes, Kieschnick said, “The Lutheran Church—Missouri Synod for 163 years has been a solid, evangelical, faithful, biblical, confessional Christian church. I pray to God it always will be.”

The Synod, however, is not as robust as it once was — it is “stuck, plateaued, running in place, falling behind and shrinking in size and relevance,” Kieschnick said.  The LCMS, he said, must accept some blame for a membership decline of some 600,000 baptized members in the past 40 years. He named such things as the church’s inability to deal with diversity in worship issues, the role of laity and the service of women in the church.  He also said a politicized culture has turned the Synod into a “denomination of parties,” and a lack of civility is “sorely wounding our church.”

Kieschnick quoted author James Adams’ “Missouri Synod mountaintop” reference that the “Missouri Synod longs to scale the highest mountain and breathe the pure but thin air that leaves others gasping.”

“If we never come down from our heights, if we stay where the air ‘leaves others gasping,’ we risk building ourselves an ivory tower,” Kieschnick said.  He urged members to take some risks, but not at the expense of compromising or diluting LCMS doctrine.

Kieschnick said the LCMS cannot share the Gospel with vastly diverse people unless members develop relationships with them, demonstrate Christian care and concern, and communicate effectively.  “They’re not automatically coming to the church,” Kieschnick said.  “So we must go to them.”

The LCMS president named a number of outreach and educational initiatives already under way.  He said the Synod is emerging as a national and global confessional leader, and that many have come to the LCMS for theological support and training, mission assistance, and conservative, confessional companionship.

“Responding to these opportunities will require greater collaboration among our congregations, districts, seminaries, auxiliaries and others.  It will also require more money,” Kieschnick said.

He also suggested professional church workers need room to be creative in ministry in their communities, while remaining clearly within LCMS doctrine.

Kieschnick said the LCMS we leave to future generations must provide safety and security in troubled times, wholesome relationships, a mission-focused community, an invitation to people to use their gifts creatively, a place where the authority of God’s Word is honored and taught, and where forgiveness is freely offered.