HOUSTON—“If something isn’t done to the structure of the Synod systematically, then it will be done chaotically,” Dr. David Buegler, vice chairman of the Floor Committee on Structure and Governance (Committee 8), told convention delegates during an open hearing on 38 resolutions for reorganizing The Lutheran Church—Missouri Synod. 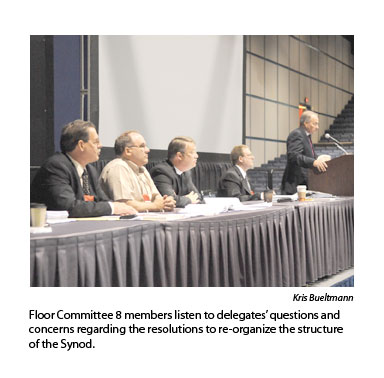 Several hundred delegates attended the two days of open hearings to ask questions and express opinions about the floor committee resolutions that are based on overtures to the convention and a report from the Blue Ribbon Task Force on Synod Structure and Governance. The resolutions also reflect feedback gathered from delegates during the past eight months.

The resolutions seek to streamline the operations of the national church.   Preliminary estimates say the resolutions, if passed, could realize more than $1 million in savings per year.

“Back in the ’60s and ’70s, we were flush with money and it was wonderful,” said Floor Committee Chairman Larry Stoterau, president of the Pacific Southwest District.  “Now, the Synod’s Board of Directors has less than $19 million in unrestricted funds.  If we don’t do something specific and intentional, the Board will be given carte blanche to make cuts.  We would rather be proactive than reactive.”

Delegate responses to the proposed resolutions ranged from comments about how the Lutheran faith is defined in the resolutions to concerns about checks and balances in the president’s office and questions about how certain functions will be accomplished if the Synod’s seven program boards and some commissions at the national office are eliminated as the resolutions propose.

“Eliminating program boards does not mean the eliminating of functions,” Stoterau told delegates.  “With the creation of the two mission boards as proposed, there will be more coordination of efforts without duplication.”

Stoterau assured delegates that passage of the resolutions is “not the end of the process, but only one step in the process.”  A transition team would be appointed to implement the changes.

He emphasized to delegates that the objective of the task force’s report and the committee’s resolutions is to have “congregations, circuits and districts more involved in generating priorities for the national corporate Synod.  With more of a say in the direction of the Synod, they will have a lot more ownership in fulfilling the mission and ministry of our church body, which is to make the love of Jesus Christ known.”