HOUSTON—The Lutheran Church—Missouri Synod Convention honored three of its congregations July 14 for outstanding work to raise funds for the Synod’s Fan into Flame campaign in support of Ablaze! mission initiatives. 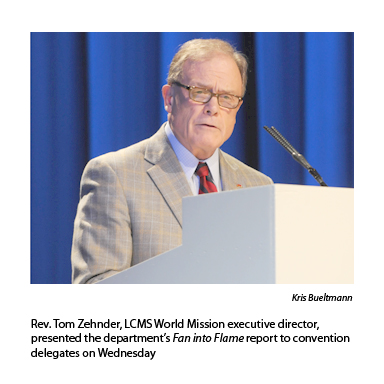 The 64th Regular Convention of The Lutheran Church—Missouri Synod is meeting July 10-17 at the George R. Brown Convention Center under the theme “ONE People–Forgiven.”  Among the approximately 3,000 participants are some 1,200 clergy and lay voting delegates.

Fan into Flame funds support Ablaze! initiatives to plant 2,000 new congregations, renew the mission vision of 2,000 existing congregations, increase by 50 percent the number of career missionaries, and increase support for the Synod’s 34 partner churches around the world.

Dr. William R. Diekelman, first vice-president of the Synod, reported that as of July 1, gifts and pledges to the campaign amounted to more than $58.9 million.

The three congregations were recognized for raising the most funds in various membership categories, said Dr. Thomas R. Zehnder, executive director of the LCMS Board for Mission Services.

“At this convention, we are recognizing congregations whom the Lord has extraordinarily blessed,” said LCMS President Dr. Gerald B. Kieschnick. “I can see that these people are excited about what’s going on in their congregations.”  He presented each congregation with a plaque in recognition of their efforts.
The convention also recognized the LCMS district presidents for the grassroots efforts with congregations to raise funds for the Ablaze! initiative.