HOUSTON—Three “target areas” underlying the service of the Lutheran Women’s Missionary League were outlined by the organization’s president in greetings to the convention of The Lutheran Church—Missouri Synod here Tuesday morning.

As the LWML continues to support Christian mission outreach at home and abroad, President Janice Wendorf said the women’s auxiliary is emphasizing the study of God’s Word, embracing 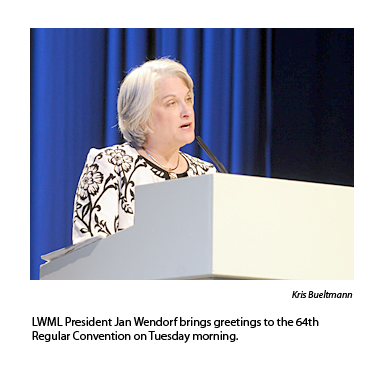 diversity and building the organization’s identity.

The 64th Regular Convention of The Lutheran Church—Missouri Synod is meeting July 10-17 at the George R. Brown Convention Center under the theme “ONE People—Forgiven.”  Among the approximately 3,000 participants are 1,200 clergy and lay voting delegates.

Explaining the three focuses, Wendorf said intentional Bible study will provide guidance and encouragement for women’s personal walks with the Lord. Noting the emphasis on diversity, she said, “The body of Christ grows and is strengthened when people of every age and culture are sought out to participate.” With the third focus — “sharing the heart and identity of LWML,” — Wendorf said the intent is to enable and equip members and advocates to share the vision of the LWML as it emphasizes mission outreach locally and globally.

Wendorf reported that the LWML is embarking on a multimedia campaign to “dramatically build awareness of LWML while supporting women who think they don’t fit into LWML.” With images of women who represent various cultures, ages and seasons of life, the campaign “will encourage women to tell their story of how the LWML has impacted them,” Wendorf explained.  She said multiple pictures of women will be used in the campaign.

The pictures were taken at the 2009 LWML convention.

At the conclusion of Wendorf’s presentation, LCMS President Dr. Gerald B. Kieschnick thanked the LWML, noting that LWML members provide “millions of dollars in support of the Synod’s mission.”

During the current biennium, the LWML has a $1.825 million goal to support 19 national mission projects. Since its founding 68 years ago, the LWML’s gifts — gathered mainly through “mite box” banks — are approaching $100 million.