By now, much of the world is aware of the senseless tragedy that unfolded in a movie theater in Aurora, Colo., in the early morning hours of Friday, July 20. A young man armed with multiple weapons murdered 12 moviegoers and wounded as many as 59 others just after a local premier of the new “Batman” movie began. 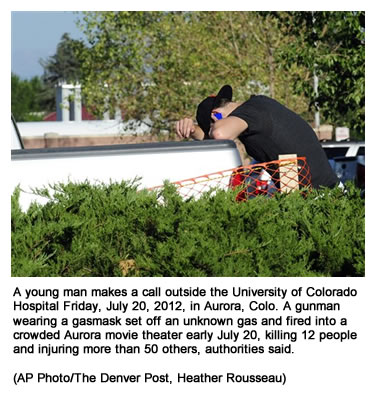 There are four Lutheran Church–Missouri Synod congregations in Aurora: Cross of Christ, Hope, Mount Olive and Peace. Also, Aurora is the headquarters of the LCMS Rocky Mountain District.

As of July 24, LCMS pastors and district staff have reported no confirmed injuries or fatalities among LCMS members in Aurora.

The Rev. Dustin Lappe, pastor of Cross of Christ — a mission congregation that worships in an Aurora movie theater south of the theater where the shootings took place — told Reporter that he and his members are “very thankful that no one in our church was directly affected” by the shootings.

“However, when you live in the community where a tragedy like this occurs, everyone is impacted. And so we have been wrapping the community in prayer and looking for ways that we can best serve the needs as they arise.

“This unfortunate event has reminded us just how important it is for us to be out in the community sharing the love of Jesus, which has been our mission all along.”

On July 22 — the first Sunday after the shootings — as the Cross of Christ congregation met for worship at the Southlands Movie Theater, Lappe said a number of people mentioned the “very eerie feeling of being there,” in a movie theater, and how the shooting across town has “changed how people … look at worshiping in a movie theater now, too.”

“Those four words — God is for us — they change everything!” Lappe writes, “how we pray … how we face our problems … how we face the future.”

The Rev. Carlos Hernandez, director of church and community development for the Synod’s Office of National Mission, as well as members of the Synod’s disaster-response team and its Rocky Mountain District component, contacted the Aurora congregations and the district shortly after news of the tragedy broke.

The LCMS Office of the President has been in contact with the district office and the affected congregations also.

Even though there are no reports of injuries among LCMS members, the tragedy has affected friends and neighbors of parishioners and left many in the community seeking consolation and an answer to the question why?

“The congregation’s elders have reached all the members of the congregation that we think might have been at the theater, and none were wounded, none were at the movie, all are safe,” reported the Rev. C. Bryan Wolfmueller, pastor of Hope Lutheran Church and secretary of the Synod’s Board for National Mission, in a Friday email to Synod colleagues. “The tragedy, though, did hit close to home. One member had three friends at the theater, one still not heard from. Another member had a friend who was shot, and was having surgery today. Another member was part of the medical response, and we are still waiting for information about a member’s co-workers.”

Wolfmueller also reported that Hope will host a prayer service for members, friends, neighbors and the Aurora community this evening (July 21).

“We had planned a family game night at church … That event has been postponed, and we will, instead, have a prayer service beginning at 6 p.m.”

When tragedies such as the Aurora shooting occur, LCMS Disaster Response and its district components have a specific protocol they follow, said the Rev. Dr. Dennis F. Lucero, pastor of Immanuel Lutheran Church in Colorado Springs and a Rocky Mountain District disaster response coordinator.

The first step in responding to any disaster is to check on church staff “to see if they are OK,” he said. The next steps extend that effort to the congregation and then to the immediate community. Once those assessments are complete, “there is the opportunity to reach out into the community as a whole,” Lucero explained Saturday morning.

In the wake of the tragedy, Rocky Mountain District President Rev. Allan D. Anderson posted this statement on the district website: “The tragedy that occurred this morning [July 20] at the Aurora movie theatre has shaken the local community and once again impacted our state, nation and the world. At this moment of pain, grief, disbelief and heartache, we pray for the families of those killed and the victims that are recovering. Together, we turn to God’s Word, as Paul writes in Phil. 4:7: ‘And the peace of God, which transcends all understanding, will guard your hearts and your minds in Christ Jesus.’ May God grant peace and comfort to those affected by this tragedy.”

Regarding the why question, Wolfmueller referred to a meditation he composed after Hurricane Katrina in 2005. We live in a vale of tears, in the valley of the shadow of death, Wolfmueller said. Yet, even in the midst of inexplicable disaster, we have the opportunity “to confess the hope we have in Christ and show our love for our neighbors.”

“It’s gratifying to hear how quickly the pastors of our congregations in Aurora mobilized to respond to their members’ and the community’s need to just talk through the shock and horror of this tragedy,” Hernandez said. “Their pastoral ears and hearts were immediately welcomed by the Aurora community.”

Hernandez added: “The LCMS disaster team will stay in touch with the pastors serving our congregations in Aurora, to provide support in their intense caregiver roles and to assess how the Synod can response in specific ways.”

Reporter will update this story as new information becomes available.

Some information for this story was contributed by Paula Schlueter Ross.