Sharing of plans to mark the 500th anniversary of the Reformation in 2017 was among the many updates addressed when representatives of the International Lutheran Council (ILC) and the Lutheran World Federation (LWF) gathered March 27-29 in Geneva, Switzerland, for the groups’ first joint meeting since 2008. 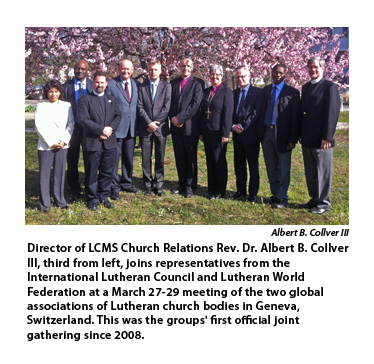 The Rev. Dr. Albert B. Collver III, director of LCMS Church Relations, reported on the Wittenberg Project being spearheaded by the LCMS and Germany’s Independent Evangelical Lutheran Church (SELK) to present the Good News through Luther’s life and teachings in Wittenberg, Germany, where the Reformation began.

Collver attended the meeting, representing LCMS President Rev. Dr. Matthew C. Harrison and as one of three ILC representatives. “The meeting was cordial and resulted in the helpful sharing of information,” Collver said on his blog at http://abc3miscellany.blogspot.com. “The LWF showed great hospitality to us.”

A topic highlighted by representatives of the two global associations of Lutheran church bodies was the need to continue conversations about common commemorations of the 500th anniversary of the Reformation in 2017, according to a communiqué released after the meeting.

Also discussed were a number of theological topics, including the different expressions of faithfulness to Scriptures, the meaning of “confessional Lutherans,” human sexuality, ministry and biblical hermeneutics.

Mayan and the Rev. Martin Junge, LWF general secretary and former president of the Evangelical Lutheran Church in Chile, co-chaired the meeting at the LWF world headquarters.

The LWF was founded in 1947 in Lund, Sweden. The ILC was established in 1958 as an association of confessional Lutheran church bodies that support one another and study theological issues together.

While the groups have a “Memorandum of Understanding” to meet annually, their last three gatherings were postponed due to changes in ILC and LWF leadership, among other factors.

With the 2012 meeting, the groups intend to resume the pattern of an annual meeting, which, according to the communiqué, are held “with a view to increased mutual understanding between the two Lutheran world bodies and their member churches.”