A hot topic both in the nation’s capital and in the mainstream media, immigration is on the minds of many Americans. But it is also pertinent to discussions within the church. 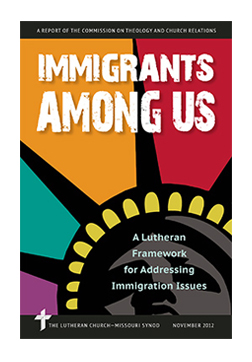 In mid-February, The Lutheran Church–Missouri Synod’s Commission on Theology and Church Relations (CTCR) plans to release its own report for such discussions — “Immigrants Among Us: A Lutheran Framework for Addressing Immigration Issues” — via an electronic version and printed copies mailed to all LCMS congregations and rostered church workers. The report will be available in both English and Spanish.

“The Lutheran Church–Missouri Synod is an immigrant church,” notes the Rev. Dr. Joel Lehenbauer, the commission’s executive director. “But Lutherans who hold to the Scriptures and the [Lutheran] Confessions can have quite different personal and political views when it comes to immigration.”

In 2007, a resolution was brought to the Synod convention, petitioning the CTCR to “provide guidance regarding immigration and ministry to immigrants.” In particular, the petition asked that guidance be given “in the difficult, and potentially illegal, decision of ministry to undocumented immigrants.” When time constraints prevented consideration of the resolution, the Synod president asked the CTCR to take up this assignment.

With numbers of immigrants on the rise, the CTCR approved its report in November 2012. The document consists of a theological discussion of immigration issues as well as guidance for congregations and church workers in dealing with and ministering to “immigrants among us.”

As part of the drafting process, a CTCR-sponsored consultation took place in late 2011 in El Paso, Texas. Members of the CTCR listened to and learned from immigrants, educators, scholars, lawyers, church workers, social workers and immigration officials. The consultation aided in clarifying the issues surrounding immigration, but it also “helped sensitize people,” recalls the Rev. Larry Vogel, associate director of the CTCR. “It put faces on an issue.”

The new document notes that it addresses the “Christian’s twofold responsibility to love the neighbor and obey the civil authorities, highlighting the tension between these two equally valid demands of the law of love in the life of the Christian.”

“These are hard debates,” Lehenbauer acknowledges. “They’re not as simple as we’d sometimes like to make them.” As the report itself notes, “The Synod did not ask for a perspective on immigration that would attempt to settle all discussions or end debate in the LCMS (much less in the U.S. itself) — and this report does not attempt to do that.”

The document also includes eight case studies that engage real-life issues. “Can I help an immigrant who is here illegally? Am I allowed? Should I help and in what ways?” asks Lehenbauer, summarizing some of the questions raised. “What sort of counsel can or should a pastor give to an immigrant who says, ‘I’m here illegally, and I have real conscience pangs about it’? These are the kinds of questions that people are asking.”

“There is also a missional tone to this report,” he adds. “It challenges people to think about how the immigrant population might perceive a church like the LCMS. We need to think about how our attitudes or a congregation’s attitude toward immigrants, apart from questions about their legal status, impacts how or whether they see the LCMS proclaiming and living out the Gospel.”

“The LCMS promotes values and practices that are shared by a large portion of the immigration population,” added Vogel. “There is a witness dimension here that simply can’t be ignored.”

Adriane Dorr is managing editor of The Lutheran Witness.