Endorsed by LCMS convention delegates in 2010, LMI is really just hitting its prime, according to Martha J. Mitkos, the Synod’s campaign director for the initiative, a cooperative project of the LCMS and Lutheran World Relief, Baltimore.

A new LMI program just began in Liberia — the sixth LMI country, along with Mali, Tanzania, Uganda, Kenya and Nigeria — and plans call for the initiative to be introduced in Ethiopia this year, with an eye toward starting LMI programs in Niger and Madagascar after that.

“There are a couple more countries that we have on the back burner, but it all depends on how much funding we receive,” Mitkos told Reporter. “So as we continue to receive funds, we will add additional countries.”

Even though the active campaign phase is ending, gifts to LMI will be accepted — and the work will continue — for the next three to five years, according to Mitkos.

That’s a good thing, she says, because LMI and other worldwide efforts to end malaria deaths are making a difference.

Just three years ago, a child was dying every 30 seconds from malaria. “And now, this past year, the World Health Organization released the newest numbers that say it’s every 66.5 seconds,” Mitkos says. “That’s globally, but 90 percent of the deaths are happening in sub-Saharan Africa” where the efforts of LMI, she adds, are contributing to that improving scenario.

“The work that we do is so important because it comes in close proximity with the Gospel,” she said. “So ultimately our goal is to help these children live so that they have the opportunity to be baptized and hear the Gospel of Christ and what He has done for us.”

The Synod’s LMI programs are conducted in conjunction with African-Lutheran church bodies.

In Liberia, West Africa, for example, LMI is working through congregations and schools of the Evangelical Lutheran Church in Liberia to train pastors, teachers and volunteers who already have relationships in so-called “last-mile,” or remote, communities.

Sharing information that way — through those established relationships with respected church leaders — “helps us become more successful in the work that we’re doing,” acknowledges Mitkos, because it’s not an outsider coming in and saying, “You have to do this.” Instead, “it’s someone that you care about and that cares about you saying: ‘You need to do this in order for you to protect your family.'”

Mitkos and Jacob Fiene, manager of LCMS Health Ministries, traveled to Liberia early this year to meet with church leaders. Fiene helped lead a workshop Jan. 10-11 in Monrovia for 23 volunteers and eight LMI Liberia staff members who will reach out to families in 17 communities. Their tasks will include meeting with community leaders to explain the LMI program and surveying each household to find out if: they own (and use) mosquito nets, family members have had (or are currently sick with) malaria, they have access to medical treatment, and they know how to prevent malaria.

The volunteers also will receive basic training from Liberia’s Ministry of Health and Social Welfare so that they can test family members for malaria and provide treatment, if warranted.

“The primary things that we try to focus on are education [about preventing malaria] and access to resources,” such as mosquito nets and additional funding, notes Mitkos. The LMI program includes training on how to apply for grants from other funding sources, such as the Geneva, Switzerland-based Global Fund, the world’s largest financier of anti-AIDS, TB and malaria programs.

LMI funding to the Evangelical Lutheran Church in Liberia is expected to be about $150,000 over three years. But with a successful LMI track record behind it, the church body should be able to solicit funds from other sources to continue its anti-malaria programs. The Liberian program also includes a local consultant, Dr. Mosoka Fallah, a leader in the anti-malaria movement.

To date, LMI has raised about $7.9 million in its fight to end malaria deaths worldwide, and Mitkos said she believes that day eventually will come. The Bill and Melinda Gates Foundation is providing significant funding toward developing a vaccine to prevent malaria, she noted, but the earliest that might be available is 2018.

“So everything that we’re doing right now that continues to build trust in these communities creates the likelihood that they’ll be more likely to take the vaccine when it’s available,” Mitkos said.

Financial contributions to LMI “are definitely still needed,” she told Reporter, and will enable the program to enter more countries where malaria — a preventable disease — still claims lives every hour of every day. 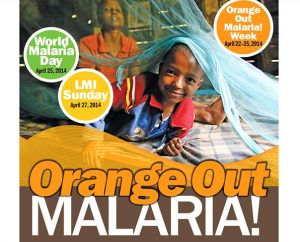 Mitkos encouraged LCMS congregations to observe Orange Out Malaria! Week April 22-25 and LMI Sunday on April 27 (or an alternate date) by praying for those who have the disease and helping to raise awareness about — and funds for — LMI.

Free resources for both observances may be downloaded here.

“Every 66.5 seconds a child is dying from something that’s been eradicated [in the United States] since 1951,” said Mitkos. “We are called by Christ to show love and mercy for our brothers and sisters in Christ, and to reach out with His hand of mercy as well as the Gospel.”

The Lutheran Malaria Initiative, she added, “is truly an opportunity for us to do that in an established setting where these are people that have pastors who will continue to nurture them and help them grow in their faith.”