The Rev. Dr. Otto C. Hintze Jr.’s new book, From Ghosts to God in Enga Land, is a must-read for Lutherans, especially those interested in the mission of sharing the Gospel with people of non-Western cultures.

Hintze’s epic saga of the Holy Spirit at work among the Enga people of Papua New Guinea (PNG) is a vivid account of the challenges Lutheran missionary families faced as they brought the Word of God to the Enga after World War II.

PNG occupies the eastern half of the island of New Guinea.

As the war drew to a close, Hintze was pursuing a career in electrical engineering when he decided to study for the ministry at Concordia Seminary, St. Louis. After his graduation, he was called to be a missionary to the central highlands of New Guinea — a place he knew very little of at the time, but which would define his life’s work.

“My own example of the Holy Spirit working through [others was] my college organic-chemistry professor … intervening [for] me, which resulted in my studying the Bible. The Holy Spirit used the Word of God to lead me to seek deeper insight into His Word at Concordia Seminary, St. Louis,” said Hintze. “However, during my extra year of study at the seminary, New Guinea opened for mission work.”

Hintze said the need for missionaries was brought to the LCMS by the Lutheran Mission in New Guinea and the Australian Lutheran Church. In 1947 the LCMS decided to send missionaries. 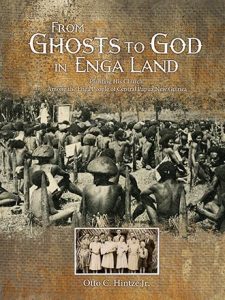 “[Then-president] Louis Sieck of Concordia Seminary called [fellow seminarian] Willard Burce and me into his office and asked if we would consider going to New Guinea,” said Hintze. “So, God uses His Spirit to see the need for outreach, the place and who should go. He who chose and sent a team of two ‘greenhorns’ straight from Concordia Seminary, along with two experienced Australian Lutheran missionaries from the Siassi Islands off the northern coast of New Guinea.”

This team would go on to bring the Gospel to the Enga people. To do so, they successfully learned, translated and put into writing a language that had never before been written. With the help of the Enga, they learned the complex spoken nuances of a non-Western tonal language that enabled them to deliver the Gospel first in the Enga’s native language. The Enga in turn learned English, which became the official language of PNG in 1975.

“Today’s missionaries need to be trained also in learning and working with the mother tongue of those to whom they are sent. They need a course in cultural anthropology,” said Hintze. “They are to approach [the native people as] whole person, male and female, family by family, in loving Christian relationships to the community as a whole, especially to tribal people.”

Hintze and other fellow Lutheran missionaries also worked to improve all facets of life for the Enga. His book tells how the Enga’s education system, agriculture and economy all improved as they embraced the Gospel.

“This means that the mission approach is made in the areas of education, agriculture, medical work, linguistics and how to live the Christian life and participate in God’s mission to everyone in a mode of interdependent complementary help with prayer,” he said.

In his book, Hintze recalls the challenges, missteps and even dangers he and his wife, Jeannelle, overcame in faith amid the austere, foreign conditions of the region and how those conditions improved significantly over time.

“God chooses very ordinary people who have strong faith in Jesus to be missionaries,” said Hintze. “God blesses whatever is done in love — even mistakes — to enable people to listen and have faith, created by the Holy Spirit, in their hearts. Even in dangerous circumstances, God’s angels protect and provide what is needed.”

Hintze said he remains thankful for the work of the Holy Spirit among the Enga people, but he warns that some people today seek to undermine the church, including those who falsely teach that the Bible has been manipulated by Christians to further Christian beliefs. Despite this, Hintze said he is confident the true Word of God will always prevail.

“God set the mission to the Enga people in motion from eternity when He sent His beloved Son Jesus Christ to save all the world,” he said. “Praise God with me that His mission has been expanded by about 120,000 baptized Gutnius Lutheran Church members [in PNG]. Pray with me that all of them will remain faithful to their personal promises of faith in Jesus and that the LCMS will send more missionaries to the great number of tribal pagans around the world.”

After 17 years as a missionary to Papua New Guinea, Hintze taught at Concordia Theological Seminary (then located in Springfield, Ill.); served on the staff of the LCMS Board for Mission Services; was pastor of Inreach and Outreach at Ascension Lutheran Church, St. Louis; and was chaplain at the LCMS International Center in St. Louis.

(Please note: An earlier version of this story had incomplete information about how to order From Ghosts to God in Enga Land. That information has been updated.  — Editor)