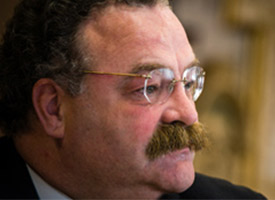 Another brutal and senseless killing spree by a crazed gunman, motivated by racial hatred, sends our thoughts swirling between despair and numbness. Why were these nine Christians martyred as they were taking in the life-giving Word of God in Christian Bible study? We know and are too often reminded that there is horrid evil in this world, and an “evil one” who bedevils the minds of such killers. Jesus said it would be so (John 17:15).

As the world devolves around us from insanity to insanity, I’m reminded of the statement of John Adams that “Our Constitution was made only for a moral and religious people. It is wholly inadequate to the government of any other.” Nowhere is that more true than in the case of the Second Amendment. As both religion and morality are on steep decline among us, we can only expect more of this insanity by individuals unhinged from the safety of families and a society normed by natural law and influenced by the genuine teaching of the Bible. “Love your neighbor as yourself” (Mark 12:31).

No truth of the New Testament is so loudly stated by Jesus than that the Triune God is the creator of all people (Matt. 19:4); that God loves all (John 3:16); that all are equally indebted to God and valuable to Him (2 Cor. 5:14–15; John 8:12). Racism is a fundamental denial of the Word of God (cf. Acts 2:5ff.; Matt. 15:21ff.) and natural law. “We hold these truths to be self-evident, that all men are created equal” (Declaration of Independence). The denial of human rights, maltreatment of persons due to race, including the forbidding of the right for a man and a woman to marry without regard to race, is contrary to natural and divinely revealed law (Holy Scripture). It also contradicts the universality of the truth of the Gospel of Christ, who died for all (Romans 3:9–10, 19; 2 Cor. 5:19).

We mourn the loss of these dear Christians and pray for their loved ones. May they be consoled by “the resurrection of the body and the life everlasting,” and the picture of heaven painted by St. John in Revelation of “a great multitude that no one could number, from every nation, from all tribes and peoples and languages, standing before the throne and before the Lamb, clothed in white robes, with palm branches in their hands” (Revelation 7:9).

We reject racism and racially motivated hatred in all its forms. We repent where we have fallen short, and we pray for strength to stand for what is good and right and true. We pray for the perpetrator and his family, even as we demand the swift execution of justice.

Lord, have mercy upon us.