The 2014 statistics (as of Dec. 31) are in for LCMS congregations — with 92 percent of them reporting at least their baptized and confirmed memberships, as well as their average weekly worship attendance. 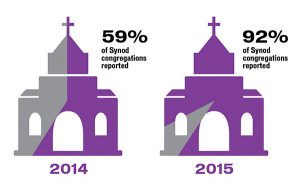 On the not-so-good side, those more accurate statistics for 2014 are down considerably from the year before in terms of the total baptized and confirmed membership in the Synod, with the worship-attendance average also down.

Total financial contributions recorded for congregations also declined from 2013 to 2014, as well as parish-education-related numbers. However, the number of “specialized ministries” conducted by congregations continued a trend of rising over the past several years.

The usual cutoff date of Apr. 15 for Rosters and Statistics to collect congregations’ statistical reports for the previous year was extended to Aug. 15 this year. And to meet that deadline, some 860 congregations reported only their baptized and confirmed membership, along with their average weekly worship-attendance numbers.

Hartwig explained that such accuracy comes into account when electing convention delegates from electoral circuits, which each “must have at least 1,500 confirmed members and fewer than 10,000 confirmed members, and should be made up of 7-20 congregations.”

When those membership counts “fall outside the requirements,” Hartwig said Synod Bylaw 3.1.2 specifies that circuits “have to think about either getting an exception from the president of the Synod or joining with an adjacent circuit to get the numbers right.”

He expressed thanks to congregations and to LCMS district presidents for their help encouraging congregations to report their statistics.

“But it’s amazing — as hard as everybody tried, that we still were lacking 8 percent of the reports” for 2014.

Kostencki added that 95 percent of all LCMS congregations have reported their statistics at least once in the past three years.

Both Hartwig and Kostencki cautioned that it may not be valid to compare summary totals of statistics to those of the previous year. They indicated that is especially true when the percentages of reporting congregations vary so widely as they did for 2014 and 2013 (for which only 59 percent of congregations reported) and when taking into account rolled-over statistics and other variables.

Instead, they favor looking at trends suggested by statistics gathered over a number of years, which might be gathered from statistical tables that will appear along with other statistical information for 2014 in the 2016 Lutheran Annual. That edition is expected to be available by year’s end from Concordia Publishing House.

Reporter nonetheless is providing a comparative rundown — as it has done in years past — of combined reported and recorded congregational statistics for 2014 and 2013.

Increases in specialized ministries reported by congregations for 2014 include the total number of 48,637 that they conducted (up 531 from 2013).

Also up in 2014, compared with 2013, are official acts, including the number of baptisms and confirmations. For 2014, congregations reported that:

Likewise increasing were the number of reported “professions of faith” (of lapsed members reinstated to congregation membership) in 2014, by 2,191 (26 percent), to 10,633.

However, the number of “back-door losses” (adults removed from congregations’ membership lists for reasons other than transfer or death) increased by 8,118 (26 percent), to 39,620.

Statistics reported for congregations’ Sunday schools and other classes declined for 2014, compared with 2013, as follows:

For 2013, all but two of those Christian-education-related figures rose, compared with those reported for 2012.