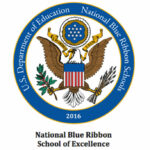 The two LCMS schools are among 329 chosen this year, including 279 public schools and 50 private schools. The honor — the highest that the U.S. Department of Education (USDE) bestows on individual schools each year — was announced Sept. 28.

“We’re so pleased that our hard work on school improvement at St. Paul has resulted in this recognition!” said Jennifer Heinze, principal of St. Paul. “We are not a large school, so it is gratifying to know that, even in a smaller setting with limited funds, this can be achieved.

“In a broader sense, it’s great that the spotlight can be turned on Lutheran schools, showing that excellence in education can be offered in a Christ-centered community,” she continued.

Heinze said the “Blue Ribbon” title is the culmination of years of hard work at St. Paul, which has some 260 kids in pre-kindergarten through eighth grade. During the last few years, St. Paul has implemented a school-improvement plan to improve both teaching and learning in all of its classrooms.

At Immanuel, many of its 492 students gathered with teachers and parents to watch the official announcement on the USDE’s YouTube channel. This is the second Blue Ribbon honor for Immanuel, which also received the award in 1990.

“We give the glory to God and are blessed to partner with other Lutheran schools to achieve excellence and share the Word of God,” said Diana Meers, principal at Immanuel. “Whenever a Blue Ribbon award is given to a Lutheran school, it serves as a testimony as to the quality education offered throughout our schools.”

Immanuel’s senior pastor, the Rev. Scott Schmieding, said, “It is wonderful serving at an LCMS school and church that have a united and harmonious mission! We strive to promote a Christ-centered atmosphere of educational excellence, innovation and creativity.”

In addition to celebrating with the local community later in the year, both schools will send representatives to the USDE’s recognition ceremony Nov. 7-8 in Washington, D.C.

“We are very proud of our two National Blue Ribbon Schools,” said Terry Schmidt, director of LCMS School Ministry. “This is an honor that exemplifies the quality that exists within these two fine institutions.”

Since the inception of the National Blue Ribbon Schools program 34 years ago, some 8,000 schools have earned the prestigious designation, including 39 LCMS schools around the country.

Megan K. Mertz (megan.mertz@lcms.org) is a staff writer and managing editor of Lutherans Engage the World with LCMS Communications.

Reformation Relevance: Sing to the Lord a New Song!