Nervous and cautious is my assessment of the state of the Synod this past fiscal year.

During FY 2016, the stock market was in turmoil and the political circus leading to the primaries and party conventions was in full swing, both of which seem to have made folks cautious about returning to the Lord an appropriate portion of His gifts to us.

Uncertainty in an election year is not unusual, although it seemed to be a bit more intense in the past year than in my recollection of previous election years.

More than 75 percent of the resources to carry out the annual mission-and-ministry plan of the Synod is fundraised.

When donors get nervous about the future of the economy or the rapid changes to what are perceived as societal norms — based on the leadership of the chief executive of the United States and how that may or may not change with the upcoming election — donated resources decline overall.

So, here it is, straight from the Statistical Tables of the 2016 edition of The Lutheran Annual.

Over the past 20 years, the gross Sunday-morning offering to LCMS congregations more than doubled, from $621 million to more than $1.3 billion.

Since 1998, the actual dollar level (ignoring inflation) portion of the Sunday-morning offering shared with the districts for district and Synod mission-and-ministry programs has remained unchanged at around $122 million.

This means that 8.78 percent ($118,292,783) of the collective Sunday-morning offerings were distributed by member congregations to the LCMS districts to support district work programs, which include a category for World Missions and Outreach.

So Synod received, for unrestricted use, 12.8 percent of the offerings that were shared with the districts, which translates to 1.12 percent (1.12 cents per offering dollar) of the collective Sunday-morning offering.

These are the facts. They are not an attempt to evaluate any district, congregation or individual’s response to the manifold gifts from our living God. We understand that costs rise (although not so much in the past few years).

We understand that there is much work our Lord would have us do in our own congregations, in our local communities, in our districts and throughout the world.

That is why the 6,000-plus member congregations of The Lutheran Church—Missouri Synod joined together: to do collectively those mission-and-ministry tasks that are too large or too inefficient for a single congregation to do alone.

Together we can do more with the help of our Triune God, who is the one certainty in a world full of turmoil. He is the Rock upon which our faith is built.

To Him be glory, forever and ever. Amen. 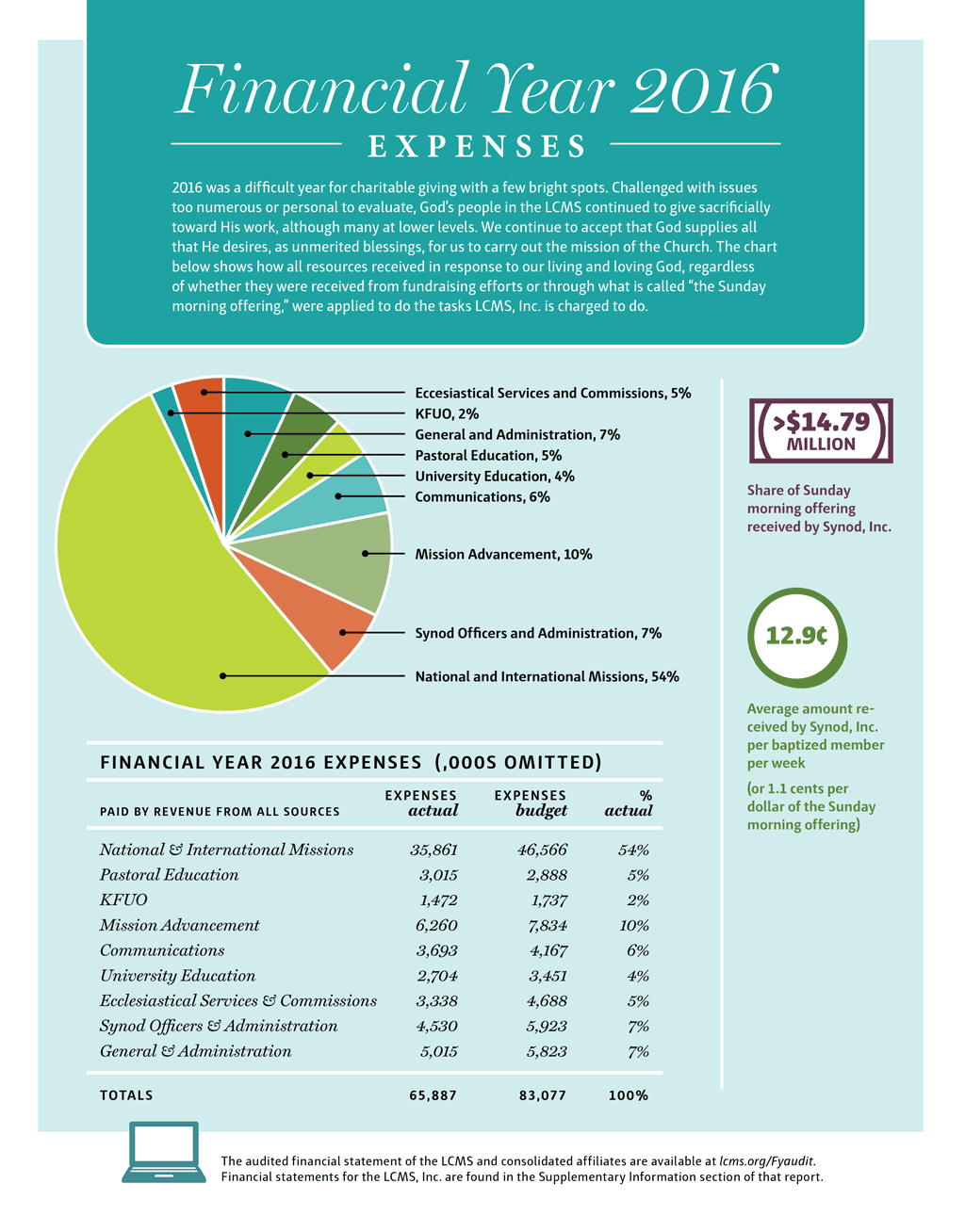