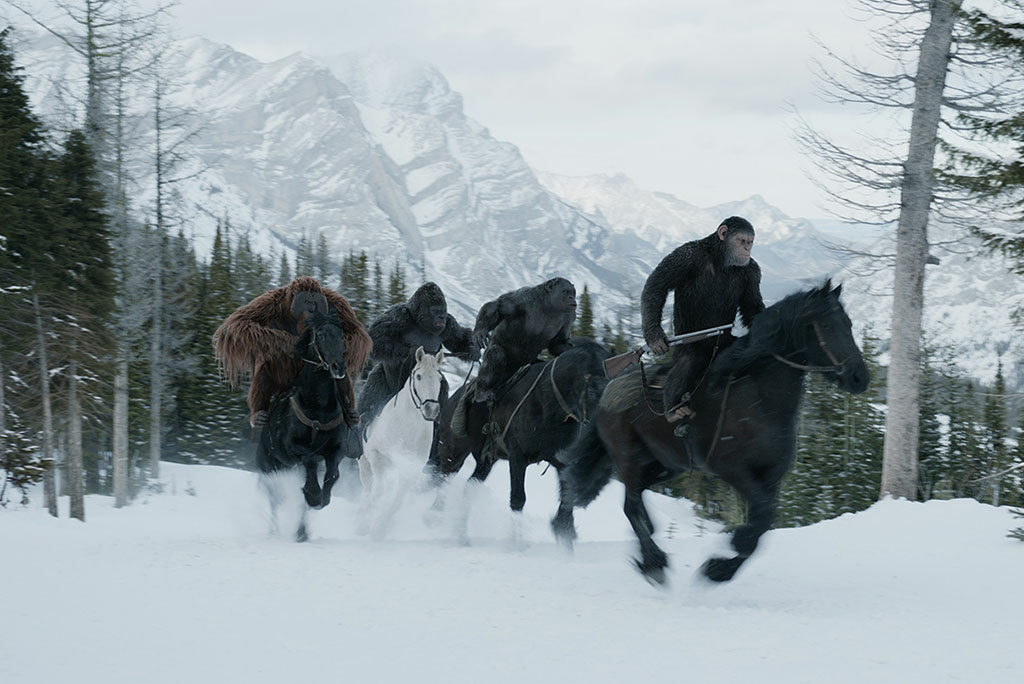 A powerful entry in the POTA franchise

This time he squares off against a ruthless warlord, referred to as “the Colonel” (Woody Harrelson), who wants both Caesar and all the apes killed to prevent the spread of a debilitating virus believed to cause loss of speech and cognitive abilities in the dwindling human population.

In this new take on the classic sci-fi film series, the reason for the rise of apes is human tampering with nature — not evolution, as was the case with the late 1960s and ’70s films.

The first reboot film, “Rise of the Planet of the Apes” (2011), introduced the Caesar character, whose intelligence and eventual ability to speak came from laboratory animal testing of a virus-based Alzheimer’s drug, ALZ 112. The drug was given to Caesar’s pregnant mother, who then passed the drug’s effects to her child.

Christian viewers will want to note the striking similarities between Caesar and Scripture’s Moses.

In the first film, Caesar is initially sentenced to death, rescued as a baby and raised in the lap of luxury while his fellow apes are imprisoned in laboratories and zoos. Discovering how his fellow apes live, he runs away from his adoptive family and, by the end of the film, leads the apes out of captivity into the wilderness to start their own community.

In the second film, “Dawn of the Planet of the Apes,” Caesar is still the ape leader and is a kind of “law-giver” who presents three laws, or principles, by which the apes should live: 1) Ape not kill ape; 2) Apes together strong; and 3) Knowledge is power. He also deals with a rebellious ape, Koba (Toby Kebbell), who had previously been mistreated in a laboratory.

The Moses of Scripture was sentenced to death because of who his mother was, a Hebrew woman (Ex. 1:15-22). He was rescued from death, being drawn up out of the Nile River, and raised in the house of the Pharaoh, the king of Egypt.

Then, seeing the plight of his true people, Moses ends up running away from his adoptive family (Ex. 2:1-15), and he eventually speaks for his people and leads them out of captivity, into the wilderness (Ex. 6-14), toward the Promised Land.

“War for the Planet of the Apes” maintains this analogy, and viewers heading into the new film will want to keep this in mind. For those who have already seen the film, it would be good to reflect on the rather obvious analogy director Matt Reeves and his writing partner, Mark Bomback, continue making.

There are more points of comparison between Moses and Caesar scattered throughout the new film, but pointing them all out would spoil the fun of finding them as they appear. 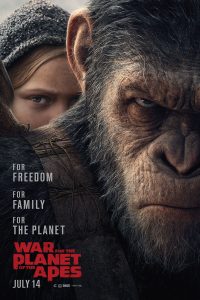 There are, however, a couple of other things to note. Greek letters are featured on human helmets, branded traitor/collaborator apes, and on buildings, trucks and other objects. Looking like an A and an upside-down U, they are the first and last letters of the Greek alphabet.

They are also the first letters of the Greek words Alpha and Omega, meaning “the first and the last, the beginning and the end.”

Jesus describes Himself in Rev. 1:8 and 22:13, using the words these letters represent.

In the film, the letters serve a dual purpose.

They are an initial hint, and then a constant reminder that these soldiers and their Colonel are in some way connected with Christianity. Ultimately a scene confirms this when a cross is repeatedly shown in the Colonel’s office during a pivotal scene.

Viewers are led to believe that the Colonel, while not a particularly virtuous Christian, is nonetheless a Christian.

The second purpose of these letters is more metaphorical. They indicate these humans and all humans who converge at the Colonel’s encampment are hanging in the balance: Will the events of the film mean a new beginning for them or will it be their end, or at least the end of things as they know them?

In addition, those Greek letters, also used in Christian art, figure prominently in the Book of Revelation, so their presence in the film has a kind of apocalyptic skew.

Viewers also may want to ponder what it means that the film’s villains are militant Christians and the protagonists are enslaved apes easily identifiable with the children of Israel from the Old Testament account of the Exodus — complete with their own Moses.

Interestingly, the rebellious ape, Koba, from “Dawn of the Planet of the Apes” makes several appearances in this film. Caesar is haunted by thoughts and dreams of him and is left asking himself if he is truly just like Koba or is he better than him? Does Caesar have a destructive desire for personal vengeance, like Koba, that could jeopardize everything he and the other apes have built as a community?

The wise orangutan, Maurice (Karin Konoval), makes an observation about Koba that sounds a lot like an admission of original sin when he says to Caesar, “Nobody can know the darkness that was inside of [Koba]. You couldn’t have known that.”

This comment comes earlier in the film, while Caesar still feels guilty about not understanding the depth of the darkness in Koba, a judgment that changes by the end of the film.

There is another moment with a traitor/collaborator ape, Red Donkey (Ty Olsson). Caesar asks him if there is anything left inside him worth being saved — the implication being that Red Donkey and other apes like him have given themselves over to the darkness and no longer fight against it, making them no longer apes. Their collaboration with the humans is evidence of this and a violation of the law, “Apes together strong.”

All this leads to a more important question: Is this really a film about humans and apes? Or is it an extended portrait of what it means to be human? A cautionary tale, perhaps, about the dangers of losing humanity and the cost of holding on to it in the face of adversity?

As a genre, sci-fi is often the vehicle for talking about societal issues in an approachable, unassuming way. Think “The Day the Earth Stood Still” (1951) and its Cold War commentary, or “Children of Men” (2006), with its commentary on the wonder of childbirth and the necessity of procreation for the survival of humanity.

What, then, is going on in these new “Planet of the Apes” films?

If they are really movies about humans and apes, then the film has this tangible theme of misanthropy. The good humans, like the well-meaning scientist and researcher Will Rodman (James Franco), Caesar’s adoptive “father” from “Rise of the Planet of the Apes” (2011), are firmly in the rearview mirror by the time “War for the Planet of the Apes” begins.

The new film features only one truly positive human character: a young girl named Nova (Amiah Miller), who shows kindness toward the apes. Yet her “human” interactions with them are complicated, as she has succumbed to the debilitating virus that causes the loss of speech and cognitive abilities in humans.

So is she even human anymore, since the Colonel lists speech and cognitive abilities as defining features of what it means to be human?

With this reading, the movie presents a sort of “Snakes and Ladders” game, where the apes are climbing up the ladder toward humanity while the humans are sliding down the snakes toward a nonhuman, animal nature.

This dichotomy is constantly expressed by showing the humans as “bad” and spiraling into chaos, and the apes (which humans categorize as animals) as “good,” ascending into a complex society.

To help drive this home, there is another talking ape with the purposely ironic name “Bad Ape” (Steve Zahn) who is, in fact, very good and helpful.

In the context of the scriptural analogy, the Colonel is clearly a kind of Pharaoh to Caesar’s Moses. Caesar even describes him as having no mercy — an indictment directed both toward the Colonel’s treatment of humans and apes, and a prophetic warning to Caesar himself.

Is it the Colonel’s hardness of heart that makes him less than human? Or is he a human only because he can speak and think?

Is it Caesar’s mercy that makes him human? Or is it his ability to speak and think?

If the implied misanthropy — dislike of humankind and, by contrast, the celebration of “animal kind” — found in these films is misdirection, and they are less to do with comparing human nature and animal nature, and more to do with human nature specifically, then it becomes an interesting take on the darkness that lurks in the heart (Matt. 15:18).

The plague of original sin and its recurrent shadow lead men like St. Paul, by the inspiration of the Holy Spirit, to write, “So I find it to be a law that when I want to do right, evil lies close at hand” (Rom. 7:21).

This is a law Caesar can’t escape, a law the Colonel — and by extension, the viewers — can’t escape on their own.

And in a Christian reading of the film, this law has no escape outside of Christ and the intervention of God, with the providential rescue found at the cross of Good Friday, prefigured scripturally in the Exodus account of crossing the Red Sea.

All analogies eventually break down and this is how it eventually breaks down in these films: What’s missing for it to be a one-to-one kind of sci-fi representation of the biblical Exodus account is an active God working on behalf of His people.

There is no burning bush in the film, no revelation of God. If God is there, He is hidden — even though there is cultural evidence of Christianity and, through the Moses analogy, Old Testament Jewish cultural markers.

That said, near the end of the film one moment could be viewed as a naturalistic coincidence, or a self-triggered retribution, or the providential hand of God. What viewers make of that moment will largely be determined by their worldview and/or the confession of faith they bring to the theater.

While not bright and cheerful, “War for the Planet of the Apes” is entertaining and interesting, well-made, with a lot of heart.

It is honest about the brokenness of human nature and, even though the word “sin” is not explicitly mentioned, the script is continually digging into the temptations and consequences revolving around sin and its impact on life.

The computer-generated imagery (CGI) is an improvement on the last film, and “Dawn of the Planet of the Apes” had phenomenal CGI!

Andy Serkis again turns in a riveting performance as Caesar. With its thoughtful nods to the original series, “War for the Planet of the Apes” is a powerful entry into this rebooted franchise that shows no sign of losing momentum.

If anything, this third film is the best yet — one part “The Ten Commandments” (1956) and one part “The Great Escape” (1963), while still clearly grounding itself in the franchise world created by “Planet of the Apes” (1968).

Fans will be happy with this new film, and newcomers to the franchise will likely be interested in going back to watch previous installments.

Again, this new series of films under the direction of Matt Reeves (whose next project is directing the upcoming Ben Affleck film, “The Batman”) proves increasingly thoughtful and serious as it unfolds, where, on the other hand, the original series only grew more and more corny and trite with each new release.