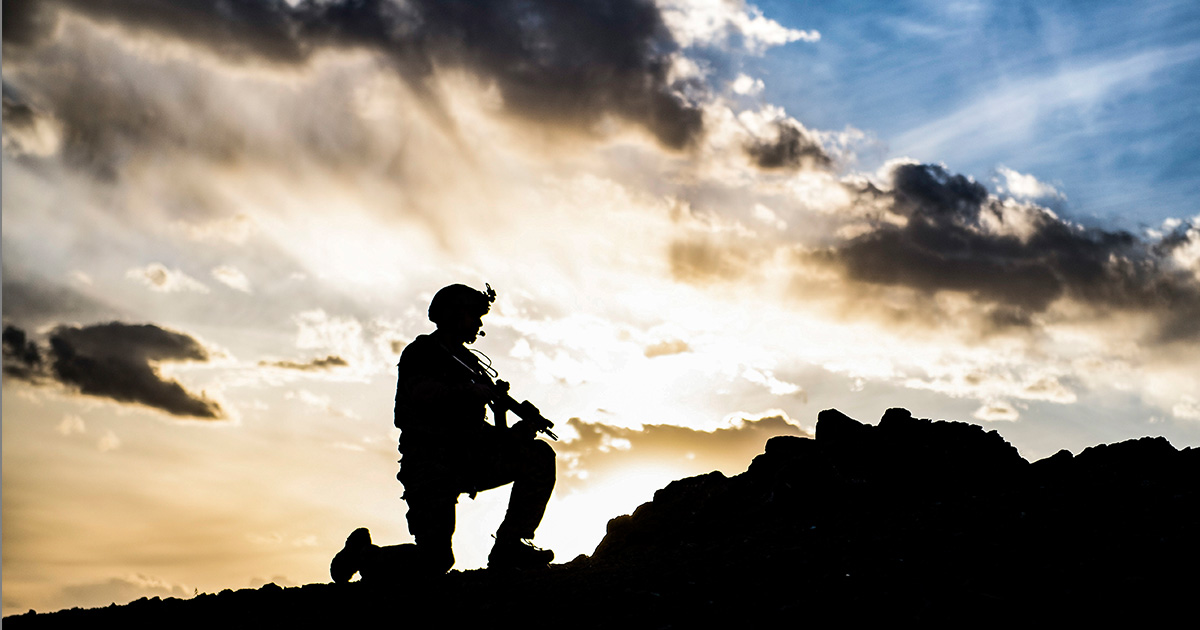 Louis “Calvin” McCoy of Sylvan Grove, Kan., knows firsthand the stress of serving in the military and then trying to readjust to civilian life back home.

A Marine, McCoy served 20-plus years around the world, including in Iraq, and still struggles with the effects of post-traumatic stress disorder, particularly when it comes to certain sounds.

He lives with lifelong “wounds” — a broken first marriage, the loss of 13 friends to combat, and another 14 to suicide.

At one point, more than a dozen years ago, he considered ending his own life.

He was despondent, at home, a loaded .45 within reach. The phone rang. It was a woman who had seen his bio on an online dating service and wanted to meet him. They talked, liked each other, dated and eventually married.

You could say she saved his life, as she’s “the only reason I’m here,” says McCoy.

And he believes Operation Barnabas, a program of the Synod’s Ministry to the Armed Forces (MAF), also can save lives.

McCoy and some 60 others attended a March 15–16 conference in St. Louis that focused on Operation Barnabas and how it can benefit active soldiers, reservists, veterans and military families.

And, just as Barnabas was St. Paul’s supportive companion on his missionary journeys, Operation Barnabas offers resources to help Synod Lutherans care for all military families — both within their congregations and out in their communities.

Says Muehler: “We really want to be an intentional outreach to veterans in our communities, wherever they are.”

About 330 of the Synod’s 6,000 congregations are active in the 10-year-old Operation Barnabas. Muehler would like to see every Synod congregation involved (since they all, no doubt, have links to military families), sharing the veteran-friendly message: “Your service was honorable, you did your duty and we respect that, you’re welcome here — no matter what you’ve been through — and the Lord loves you.”

The national conference — made possible by a $27,750 grant from the Lutheran Women’s Missionary League — offered free registration, meals and lodging. Its purpose? To share ideas, promote networking and motivate attendees to start or expand Operation Barnabas ministries in their congregations and districts. Participants included representatives from 20 of the Synod’s 35 districts.

Conference presentations focused on the basics of a Barnabas ministry and how to start one, best practices for reaching out to military families and veterans, supporting the mental health of veterans in rural areas, using comfort dogs in congregational ministries, preventing suicide among veterans and living in faith.

Advice from a general

A highlight was a no-holds-barred talk by three-star Lt. Gen. Rick Lynch (U.S. Army, retired), an LCMS Lutheran who wasn’t baptized until he was 32.

Lynch, author of Work Hard, Pray Hard: The Power of Faith in Action, spoke of his journey from a religion-free upbringing, to his military service, to actively sharing his faith in Jesus Christ.

He called a mirror the “most important” thing in a home, and encouraged listeners to look at their reflection daily and ask, “How am I doing?” in the Christian tasks of sharing their faith and helping others.

He espoused humility like that of his good friend former President George H.W. Bush, who did many “wonderful” things for others but didn’t talk about them because his mother told him not to.

Lynch encouraged conference-goers to put as much emphasis into becoming “spiritually fit” as becoming physically fit by spending more time studying the Bible and praying, perhaps two hours a day.

He urged them to trust in God, something Lynch said he struggles with because he doesn’t believe in accidents; rather, he knows God has a plan and a reason, even when that involves the death of young soldiers in combat.

If someone only took the time to listen to a hurting veteran — “and that person could be you … just caring is very important” — more lives might be saved, she said.

Cook shared lots of statistics pertaining to the U.S., including that suicide is the 10th leading cause of death; someone attempts suicide every 35 seconds; and veterans account for 18 percent (some 20 per day) of the 42,000 deaths by suicide annually.

She likened the potential for suicide to a scale: the more bad things that pile up, tipping a person’s positive-negative life balance, the more that person might be at risk. And if someone talks about suicide, take it seriously and get him or her some help.

Older white males are the highest-risk group, she said, followed by younger, unmarried white males who live alone, particularly those who’ve recently lost a close relationship, someone who provided support. Other risk factors include loneliness, health problems and a loss of meaning or purpose in life.

Don’t be afraid to ask the question, “Are you thinking about killing yourself?” And if that’s a possibility, she said, don’t leave the person alone until they’re connected to help, a “warm handoff.”

Depression, the underlying cause of most suicides, “is treatable,” Cook noted, and she offered an acronym for responding to those who may be suicidal — SAVE: “know the Signs,” “Ask the question,” “Validate their feelings” and “Encourage treatment.”

Local VA hospitals, she said, “want to help,” so don’t hesitate to call.

Most of those who have served in the military, particularly in combat, tend to trust and confide most readily in others who have served, Danielsen noted.

Congregations, he said, are well-positioned to spur “healing and growth” among military families and veterans by creating an environment of “caring relationships”: being a friend, offering a job or task, extending an invitation to Bible study and worship.

Danielsen shared some ways LCMS congregations are caring for military families and veterans, including sending donated goods from local stores to deployed troops, erecting a memorial to those who have served, compiling a book of veterans’ stories, and taking part in the Synod’s “Adopt–A–Chaplain” program (send an email to nancy.rowley@lcms.org for information).

Developing relationships with service members is the “key” to helping them, he said, and “being a friend” may fill their biggest need.

A ‘church that cares’

Numerous ideas to help congregations reach out to military families were shared by the Rev. Dr. Michael Morehouse, a 23-year U.S. Army veteran and pastor of Catalina Lutheran Church in Catalina, Ariz., one of the first congregations to start an Operation Barnabas ministry.

Among Morehouse’s suggestions were these:

Morehouse noted that his congregation — which partners with a local restaurant to offer free meals to veterans — now has a reputation as “the church that cares.”

In his presentation on equipping clergy to help military families, Chaplain Keith Ethridge, associate director of the National Chaplain Center, Department of Veterans Affairs, noted that a high percentage of the nation’s 22 million veterans live in rural communities.

Only about six of the 20 veterans who commit suicide each day have a relationship with their local veterans health care, he said, so the need to connect with those who are hurting is “overwhelming.”

To be successful, he added, “we have to work together.”

Ethridge shared details about how and why veterans are hurting, and invited conference-goers to find out more about the VA-sponsored Community Clergy Training Program to Support Rural Veterans’ Mental Health that’s designed to help pastors respond to the needs of veterans and their families.

The free, nine-hour program includes four DVD-based training modules, plus on-site coaching and discussion, and is designed for cohorts of six to eight pastors.

Asked why she attended the Operation Barnabas conference, Joann Sala, a former police investigator from Groveland, Fla., gave a two-word response: “I care.”

Sala’s husband, Chris Hopkins, spent 17 years in the U.S. Army, so she knows all too well the needs of military families during a deployment.

“Women want to connect” with others, she said, so congregations might want to ask, “What are their needs?” That connection is important to maintain during the deployment as well as when the service member returns home, Sala said.

The couple’s congregation, Woodlands Lutheran Church in Montverde, Fla., started its Operation Barnabas ministry about two years ago, and Hopkins also serves on the Barnabas task force for the Synod’s Florida-Georgia District.

In addition to packing hygiene supplies, snacks, ear buds and other items, members wrote personal letters to 42 soldiers — each addressed by name. Those personal relationships are important, he says, as troops “need to know how much you care about them,” as individuals.

Only by talking with military families and veterans — and building relationships — can you find out what their needs are, he said, adding, “There are a lot of hurting military-connected families out there.”