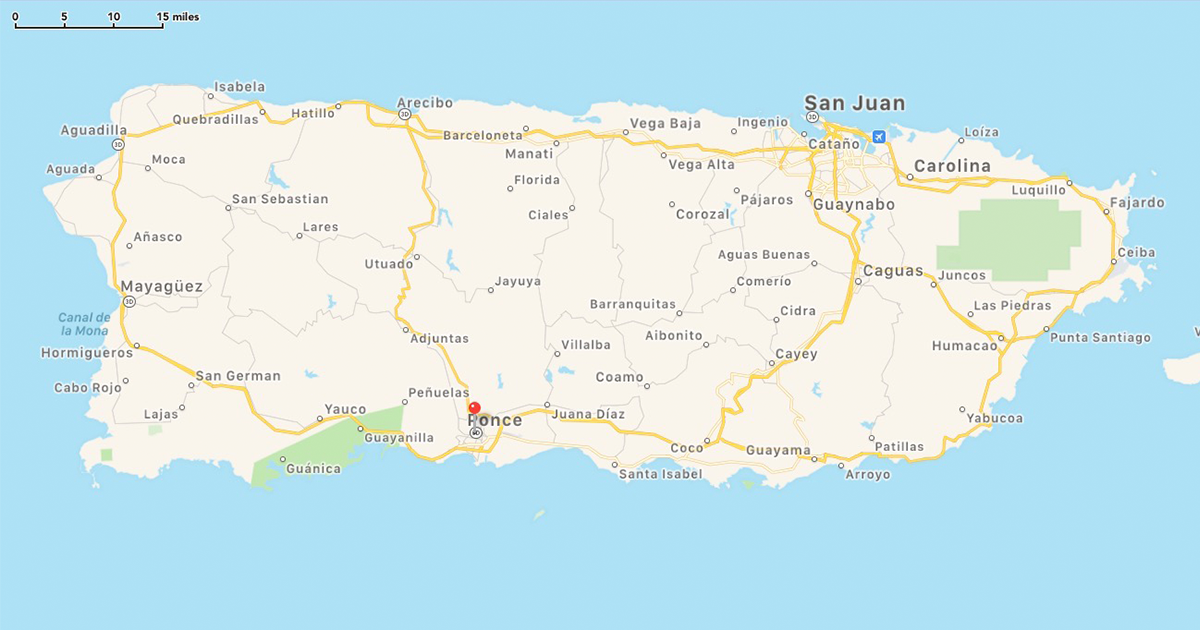 On Jan. 7, a 6.4 magnitude earthquake hit Puerto Rico in the early morning hours. It is the largest earthquake to strike the island in over a century and comes amid the continuing effort to recover from 2017’s Hurricane Maria.

The Jan. 7 earthquake follows more than 500 earthquakes of at least magnitude 2 in Puerto Rico since Dec. 28. An assessment team from The Lutheran Church—Missouri Synod (LCMS) is preparing to visit Puerto Rico in the next few days. The team will include the Rev. Dr. Ross Johnson, executive director of LCMS World Relief and Human Care Disaster Response; the Rev. Ted Krey, LCMS regional director for Latin America and the Caribbean (LAC); and the Rev. Charles St-Onge, LAC regional faciliator.

Yesterday morning, at around 4:30 a.m., we were shaken awake by a powerful 6.4 magnitude earthquake which struck off the south coast of the island, near a town called Guayanilla, which is a short distance away (15 minutes or so by car) from Ponce. At about 7 a.m., we were hit by a second quake, this time of a 6.0 magnitude. …

Immediately following the first major earthquake we … began calling …  to check on everyone’s well-being. Thanks to God’s grace and protection, all of our congregation members are well, and none of them suffered damages beyond broken plates or wall hangings.

In the morning … we made an exploratory visit to the church. … Things seemed mostly OK, but a concerning crack appeared on the back side of the multi-purpose room we … have been using as a sanctuary. … Because of the crack and aftershocks, we made the decision not to enter the building.

Once we had verified that our primary group was well, we began to check on neighbors. … We began hearing rumors of some significant damage downtown and … that the street the church is on was closed because of collapsed buildings. This had not been the case when we did our initial check, so we assume that the collapse happened during the second, 6.0, quake.

At this point we also learned that one man in Ponce had been killed from a collapsed wall [and] that the road between Ponce and Mayaguez was blocked, [which meant] that we would not be able to reach [team members in Mayaguez] without traveling north through San Juan, about a five-hour drive.

At around noon, we connected with our regional team, currently meeting in Belize, and talked through our next steps. … I traveled to the fire department and presented myself as the local Lutheran pastor and missionary ready and able to help. They were very receptive and brought me around to the different coordination centers so that I could pray for and talk to the dispatch teams and police officers.

From there they sent me to connect with the municipality who was trying to set up a refugee center in a stadium across town. Christel and I stopped by the church again to gather materials … and at that point could see the significant changes that the second quake had brought to the situation.

Rubble covered the street to the church from walls that had fallen off some neighboring buildings. …The cracks in the wall at church were much larger, confirming that we should not enter the building without an inspection, but fortunately, the majority of our disaster supplies are stored in the CARD (our Disaster Response and Mercy House) center, which is not set up yet with water or electricity but appears to have suffered minimal damage. We loaded the car up with tables, mercy literature, coloring books, a mic and speaker that operate on battery power, and whatever we could think of that might be useful.

Before leaving for the camp, we went to check on the elderly living facility where we do our weekly visits. … It was heartbreaking to see the large cracks running up and down the front of the building, and we [were] told that the residents had been moved to the refugee center.

When we arrived at the [refugee] center, we saw people everywhere sleeping in their cars, sitting in circles with shocked and tired expressions, and generally disorganized. … The only organization was being handled by one of the municipality workers, who was heroically managing a disaster response center from scratch without much support. She had a handful of volunteers … but the situation was very complicated. The original plan had been to house people in the basketball stadium, which had a roof, but … with the [damage and] risk of additional quakes, it was no longer an option.

The next plan was to put up tarps and have people sleep in the open in the baseball stadium, but with unseasonable heavy rains this whole last week, this did not seem like a good option, either. Most people at the camp had come from buildings which were now deemed to be unsafe to enter  and would likely be living there for weeks.

We found the people from the elderly center and were able to spend some time visiting and counseling. … More and more people poured into the camp as time went on, and we set up some tables and began doing a small impromptu VBS for the adults and kids. A volunteer nurse showed up and used one of our tables for taking blood pressure and checking on people.

In another area, one of the municipal workers did a magic show! I was able to hand out mercy devotionals and talk to families who had lost everything, as well as pray with small groups of people who were hurting. Everyone was waiting for 4:00, when they [had been] told they would be moved into the stadium, but this never ended up happening. A community leader … gathered a large group together and asked me to give a message and lead them in prayer, so I did a brief sermon on Psalm 46 and we prayed together. [I was] thankful that we had brought our mic and speaker. …

Throughout the process, we developed a good relationship with the municipal workers and gathered information on needs that could be filled by our support team. Surprisingly, we were the only church-workers present, and the only congregation involved.

The National Guard arrived at about 5:30 and … overruled the plan to move people into the baseball stadium. … The new location … a vocational school down the road, was not the least bit prepared for conversion into a refugee center, and it was now getting dark. Many of the people had been at the stadium since early in the morning and were very tired. The National Guard and some leadership from San Juan used our mic and speaker to make the announcements! The municipal leaders confided in me that they did not have sufficient food or water for the people that were coming and had been making tuna burritos by hand to try to have something to give.

At this point our Mayaguez teammates, Pastor Gustavo Maita and Project Manager James Krey, …  braved the long lines in Mayaguez and then a treacherous road to Ponce (now cleared) to get us a car load of supplies. While we waited for them, we worked to keep people calm and helped … set up the refugee center. … Even with the National Guard, there were only about 20 workers, so we were scrambling to get things done. There was no electricity at the vocational school, so we were working from emergency lights.

One example project was drying off a gymnasium floor with about a half an inch of water on it with brooms and mops so that it would be ready for people to sleep on. There were not remotely enough beds, and most people need to sleep on the floor. …

When the car from Mayaguez showed up, there was a lot of rejoicing. … We had purchased not only water but things like granola bars, fruit cups, wipes, diapers (adult and baby), and Ensure beverages for the elderly. I spent some time with the mayor of Ponce and her staff and prayed with her. At about the same time, a van showed up from San Juan with supplies from the municipality there. We worked to distribute in person the products for the elderly. … It is amazing that God prepared our care for them so far in advance!

We stuck around late into the night making sure people were settling down, and then went to check on a member who needed some food to eat, gave a small message and prayer for his neighbors who were outside sleeping in the parking lot and terrified, and then made it back to the house at around 11:00 p.m. Despite wanting to sleep as much as possible to get back to the refugee camp well rested, it has been hard to sleep because of continuing aftershocks, so I got up and wrote this update!

Neuendorf went on to outline the next day’s plan, which involves receiving another shipment of supplies from Mayaguez and caring for people at the refugee center. Read future updates from the Neuendorfs at their missionary Facebook page.

The LCMS has provided a $25,000 grant from its available general disaster relief funds. Those interested in helping to continue the Synod’s humanitarian responses are encouraged to prayerfully consider a contribution designated for LCMS World Relief and Human Care. To donate online or find out more, visit lcms.org/how-we-serve/mercy. If you have questions or would like to discuss how you would prefer to help, contact LCMS Mission Advancement at mission.advancement@lcms.org or 888-930-4438.