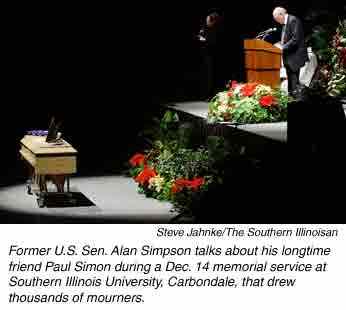 Simon, a member of Our Savior since 1974, was especially helpful to the congregation’s international ministry, Gray said, stepping in to help secure visas for members’ relatives from China, or donating funds anonymously for specific needs, such as food, clothing and educational expenses.

One young woman, eight months pregnant with her first child and scared, wanted her mother to be with her.  Simon was able to speed the visa process, bringing the woman’s mother from China to the United States in just a few days, Gray said.

“He was exceptionally concerned about people who were hurting,” Gray said.

Visitation for Simon, 75, who died Dec. 9 of complications from heart surgery, was held Dec. 13 at Our Savior.  Gray estimates that about 2,000 people paid their respects.

Just prior to the visitation, Gray led a private memorial service at Our Savior for family members.  A public memorial, Dec. 14 at Southern Illinois University at Carbondale, drew as many as 6,000 people, according to university and community organizers.

Simon and his brother, Rev. Arthur Simon of Brentwood, Md., were the sons of LCMS missionaries Rev. Martin and Ruth Simon, who served in China.

As a senator, Paul Simon was criticized by Synod and Lutheran pro-life leaders for his support of abortion rights.  Gray said he and Simon spent a lot of time discussing many issues from constitutional, moral, ethical and Scriptural viewpoints.  The two “listened to each other” and maintained “a good relationship,” he said.

What some people may not know, Gray said, is that, while serving as a senator, Simon and his first wife, Jeanne, invited two pregnant, unmarried African American women to live with them.  The Simons paid their guests’ medical and living expenses, and helped them find jobs “so they could have their children,” he said.

Gray said it was not unusual for Simon to call and ask for a meeting to talk something over, and he recalled the time his friend said he was thinking of running for president.

“President of what?” Gray asked, laughing at the memory.

During his first term in the Senate, Simon had sought the Democratic nomination for president, but ended his campaign in April 1988.