Results of the Lutheran Youth Fellowship Youth Poll from this year’s National LCMS Youth Gathering are “noteworthy for the fact that nothing changed much from the last poll taken three years ago,” said Rev. Terry Dittmer, director of LCMS Youth Ministry.

“What that means,” he told Reporter, “is that — just as the 2001 poll results indicated — young people in the Synod are still spending relatively less time in Bible study or devotions while they consider themselves active in church, 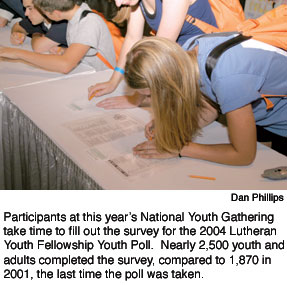 and pretty much agree with the Synod’s strong stands against abortion and sex outside of marriage, as well as against homosexuality.”

The one thing that is different is that 2,493 Youth Gathering participants this year completed the survey — compared with 1,870 three years ago.

“This was by far the largest sample ever drawn,” Dittmer said.  He attributed the rise to this year’s poll being taken “in a higher-traffic area” at the Gathering.

Concerning local involvement, 78 percent (compared with 82 percent in 2001) of all those surveyed said they consider themselves active or very active in their congregations and 68 percent (65.8 percent in 2001) said the same of their parents.

Almost 91 percent (down only one percentage point from 2001) said they sometimes or always rely on God to help them make decisions.

On the matter of personal Bible study or devotion, the questions varied somewhat from those asked in 2001.

The latest poll revealed that 46 percent say they engage in “almost no personal Bible study or devotion,” while 31.7 percent three years ago reported “very little or no time” with it.

This year, 38 percent reported personal Bible study or devotions totaling at least 30 minutes each week.  In 2001, 37.1 percent said they spend up to 20 minutes a week in such activity.

Those saying this year that premarital sex is always wrong is down slightly — 63 percent, compared with 67 percent in 2001.

Related findings for this year, compared with those in 2001, are:

With regard to addictive substances, 15 percent in 2004 said they smoke tobacco at least socially; 86 percent said they never take recreational drugs; 41 percent that they never drink alcohol; 26 percent admitted to drinking at least once a month; and 28 percent say they have been intoxicated by alcohol in the last year.

On the question of ordination of women as pastors, 14 percent (up from 11.7 percent three years ago) said that women should be ordained, and 41 percent (40.1 percent in 2001) agreed with the LCMS position on women’s ordination.

Three years ago, the same concerns were chosen, and in the same order.

“Interestingly,” Dittmer said, “neither war nor terrorism appear to be major concerns, despite the events of the last three years.”

This was the ninth time that such a poll was taken during a National LCMS Youth Gathering.

Dittmer said that the poll “helps us in LCMS Youth Ministry evaluate the needs for resources that are effective for congregations as it gives us a feel for who the young people in the LCMS are.”

“The fact that youth cite their own faith as their top concern suggests a strong need for the church to continue focusing on faith development for its junior- and senior-high youth,” Dittmer said.

“This year’s poll also points to the need for the church to continue sharing its position on significant issues like church fellowship, human sexuality, abortion and women’s ordination,” he said. “And the fact that a sizeable portion of our youth feel the way they do about using abusive substances is a matter of concern that the church needs to address.”