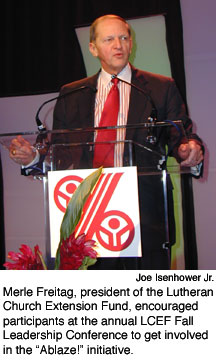 participants at the annual LCEF Fall Leadership Conference here to “get involved, personally and organizationally, in a big way” with Ablaze!, LCMS World Mission’s initiative to reach 100 million unreached people with the Gospel by 2017.

“I believe this is the right initiative, at the right time, by the right organization; and, as such, is an opportunity of unparalleled importance to The Lutheran Church–Missouri Synod,” said Freitag in his “The State of the LCEF” address Nov. 21.

“One Mission — Ablaze! — Igniting the Flame” was the theme for this year’s Nov. 19-21 conference.

Freitag noted that Jesus “gave us an example” of how to accomplish the Ablaze! goal when he said in Luke 10, “the harvest is plentiful, but the workers are few.”

“Then He sent out … disciples … to spread the message, the Good News,” he said.

“So, it is clear,” Freitag said. “Our mission as a community of believers — as a church — is to be outreach-oriented, not contained within the walls of a congregation, but to go out and instruct others [and] share the message of the Word.”

“You need to be an initiator,” he told conference participants, “in your organization, your department, your school and your church. … Start your own Ablaze! movement.  Share your passion with others.”

Freitag noted that LCEF has decided to support Ablaze! in three specific ways, by:

Freitag also provided an update on other LCEF activities, as of June 30.

He reported that total assets on that date stood at a record $1.398 billion, that the capital-asset ratio (which indicates financial strength) improved to 11.24 percent, and that the loan portfolio grew 7.3 percent, to $1.098 billion.

“Congregations continue to be our primary customer and our primary focus,” he said, “accounting for 77 percent of the loan portfolio.

“In addition to growth in loans, the other good news is that the loan interest rate has been remarkably low for the past year, [with] rates for congregations on new loans dropping to as low as 5 percent,” Freitag said.

Since interest rates recently have started to climb, he predicted that LCEF cost of funds will rise, “but at a slower rate than the marketplace. … That will be good for all of our loan customers.” 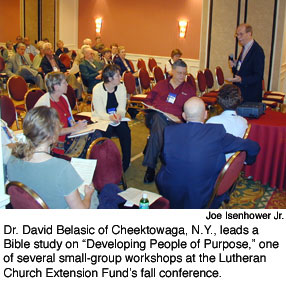 illion), but is projected to drop to about $180 million for the fiscal year that ends next June.

“In spite of the drop, that high loan demand for five years is good news for the Missouri Synod,” Freitag said.  “It reflects optimism by the people in the pews about the future of their church body.

“The related good news,” he said, “is that investors in LCEF continued to be strong supporters for the work of the church” in FY 2004, “and their invested funds will meet the projected loan demand at least for the next 18 months.

“We had a remarkable year,” Freitag told the conference participants, with earnings for 2004 “substantially above prior years.” As a result, LCEF management and  its Board of Directors “doubled the distribution of shared earnings to our partners in ministry,” he said.

He then showed a slide revealing that $2.54 million was distributed from those earnings — $254,000 to the Synod and $2.29 million for 28 LCEF partner districts.

Among other “highlights” for LCEF, Freitag cited:

In his address to the conference, Synod President Gerald Kieschnick told participants, ” I am counting on each and all of you to provide leadership for our wonderful church in the years ahead.”

Kieschnick said he has “passion to move this church that has gained the reputation of being a ‘sleeping giant’ into one that will be known as a ‘church ablaze’ in the One Mission of our Lord and Savior Jesus Christ.”

“It is no secret that I am energized by the One Mission–Ablaze! emphasis that is sweeping across our church,” Kieschnick said. “As I look at all that is going on at this particular conference and at so many of the 6,150 congregations of our Lutheran Church–Missouri Synod and [its] mission stations and partners, I truly believe the hand of Almighty God is upon our little church