Efforts of medical-van staff lead to worship groups in Kyrgyzstan

A single ministry in Kyrgyzstan already has touched the lives of some 112,000 people there — both physically and spiritually — and its director says she’s confident it will reach hundreds of t 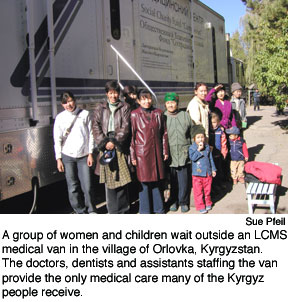 housands more in the years to come, doing its part toward reaching the Ablaze! goal of sharing the Gospel with 100 million people by 2017.

Emblazoned with a large Synod logo cross, the Social Charity Fund “Compassion” medical van has been a welcome sight in 118 Kyrgyzstan villages since 1999, bringing basic medical and dental care to people without it, according to nurse Sue Pfeil, director of the ministry.

Staffing the “van,” actually a 53-foot truck trailer, are volunteer doctors, nurses, dentists, dental assistants and eyeglass technicians.  The van includes an exam room, a dental office and a clinic where visitors can be fitted for used eyeglasses.

Christian evangelists, who also distribute such things as clothing and school supplies, work outside the van, visiting — and sharing their faith — with those who are waiting to see a doctor.

As a “direct result” of the medical-van staff and the evangelists, worship services are now taking place in five Kyrgyzstan villages, with nearly 300 children and adults involved, according to Pfeil.

Pfeil, whose husband, Rev. Bob Pfeil, serves LCMS World Mission as a theological educator in Kyrgyzstan, has worked with the medical van since it began operation in June 1999.  Bob Pfeil and Rev. Tim Nickel, also an LCMS missionary, lead Bible studies and provide theological training for the van’s evangelists and others in Kyrgyzstan.

The Kyrgyz people are very grateful for the traveling ministry, according to Sue Pfeil.  “Many of them would not have the basic necessary medical or dental care if it were not for the medical van visiting in or near their villages,” she said.

One Kyrgyz mother, whose husband had left her with two children, told Pfeil she had walked for three days so her children could see the van’s dentist.

The young mother, who was supporting her family by picking beets, lost three days salary.  But she told Pfeil it was worth it — “first, to have the medical and dental care, but then, to hear about Jesus and know that there is hope in Him and her life,” she said.

Medical and other volunteers are needed for the van ministry next year, and may serve from two weeks to a year.  For more information, call LCMS World Mission at (800) 433-3954 or send an e-mail to mission.recruitment@lcms.org.