Their meeting was the fifth “One Mission Ablaze: Igniting Congregations” event the president’s office has sponsored in the last year.

Increasing worship attendance in non-metropolitan areas was the focus of this event, and the participants were from LCMS congregations in such 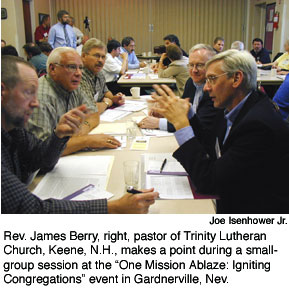 areas that reported the greatest increase in worship attendance between 1997 and 2002.

“These igniting events are about the mission Jesus Christ has given His church — to bring the Gospel to lost people,” Kieschnick said in his sermon during worship at Trinity Lutheran Church, Gardnerville, which hosted the event. The town is located about 50 miles south of Reno.

By the end of the event, the participants had shared their congregations’ stories in small-group settings and signed “covenants” committing each of them to “shar[ing] our God-guided expertise with the church at-large by mentoring four other congregations to greater increases in worship attendance over the next five years.”

As the event ended, they also agreed that each of their congregations would use $2,000 in funding from Thrivent Financial for Lutherans to develop more worship-attendance-related resources.

Thrivent has funded all five “Igniting” events to date, as it will at least three more planned through next spring.  The next event, set for Nov. 12-13 in Katy, Texas, will focus on increased worship attendance among newly  planted churches.

Several pastors at the Gardnerville event also shared their congregations’ stories with Reporter.

Members of Trinity Lutheran Church, Keene, N.H., “talk and act their faith,” said Rev. James W. Berry, pastor of that congregation, which had a worship-attendance growth from about 130 to 200 weekly in the five-year period.

“Our members say to their family and friends, ‘Jesus is great; come and see,'” Berry said.

“People do come,” he told Reporter. “And once they’re inside the door, the Holy Spirit works on them and they too become excited, contagious Christians.”

Berry related stories of members who shared that excitement with future members at a laundromat and at work.

Also in that five-year period, Our Savior Lutheran Church, Minot, N.D., went from average weekly worship attendance of 145 to more than 300.

Its pastor, Rev. Paul A. Krueger, said there are a number of “general principles … that stand behind everything that we do.”

He said those include “a commitment to … doing things to the best of our ability — whether it’s preaching, the liturgical setting, the choir or the music in general ….”

“[There is] an atmosphere of welcome and grace” at Our Savior, Krueger said. “We have an intentional commitment to building up people, we really are not afraid of stepping out in faith and trying new ways of doing things, we have a close working relationship [within] our staff and there is … emphasis on word-of-mouth
outreach.”

Krueger said he thought “the best things” about the Gardnerville event were “being recognized and thanked for doing a good job [when] usually we’ve been viewed with suspicion because we’re growing” and “the inspiration [that] we must become a church reaching the lost once again.”

Although the town’s population has declined in those years, “I believe that we, by God’s grace, have grown because our goal is to be a visitor-friendly church, to show an interest in people and to visit all our visitors,” said Rev. Manfred Fremder, Zion’s pastor.

Fremder said he also believes several other factors influenced the congregation’s worship-attendance growth, including the move from a 130-year-old building in town “with almost no off-street parking” to a new building on the edge of town “with sufficient off-street parking [and] complete accessibility.”

Fremder said Zion has “a system of greeters” who meet visitors “and are committed to contacting them with a hand-written note [which he writes] and a congregation-member visit within a few days of the Sunday they visit.”

Fremder said the best part of the Gardnerville event for him and for Gene Hanus, a lay member of Zion, was “the sharing with other congregations of what we had in common and what seemed to be working for each of us.  We were challenged by the goal-setting process for the next five years,” Fremder said.  “But we also felt that was a high point.”