When 11 children arrived at Carol Joy Holling Camp near Ashland, Neb., for a July 17-18 weekend just for them, they had one thing in common — they all rode out the F-4 tornadoes that hit a 52-mile swath of southeast Nebraska May 22, packing winds upwards of 260 miles per hour.

Sponsors of the “Hope in the Midst” weekend were Nebraska Lutheran Disaster Response (LDR), the LC 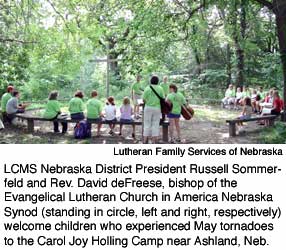 “We wanted to do something for the children whose lives have been affected,” said Roger Kruger, Nebraska LDR director.  “In addition to having their sense of security disturbed, many missed out on summer vacations and … activities.”

Besides regular camp activities like swimming, canoeing, campfire singing and Bible stories (including camp counselors leading them through Concordia Publishing House’s “Arch Book” about Jesus calming the storm), the young campers told about their experiences during and since the tornadoes.

“It happened in a craft time,” Sommerfeld told Reporter.  He said the children were making storm boxes with items like flashlights, batteries, first-aid kits, blankets and non-perishable food.  They wrote Bible verses on the boxes and drew Christian symbols on them.

“The children really began to talk,” Sommerfeld said, “and we intensely listened. They gave wonderful testimony of the Lord’s care during the storms and since that time, sometimes with an element of humor.”

“The weekend camp reminded me of just how very, very important it is for Christians to demonstrate the compassion of Christ for storm victims,” he said, “especially for children.”

Sommerfeld said that he and deFreese have since talked about “the courage and the resilience that the Lord gave these children.  The perspective the Lord is giving them of His care through the storm is remarkable.”