Pentecost 2000/Pentecost 2000+, LCMS World Mission’s initiative to encourage the start of 1,000 cross-cultural ministries in the United States, has met its goal.

As of this writing, the P2K Web site at www.pentecost2000.com lists 1,008 new ministries, according to Director Marie Biesenthal. 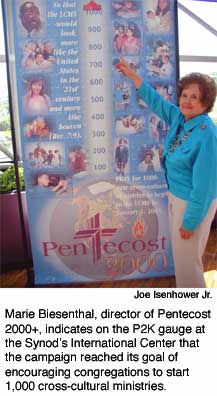 “What’s important about that number is that [through these efforts] people have heard and learned of Jesus,” Biesenthal said.  “What’s also important is the number of LCMS members who have shared their faith and their hope in knowing their Lord and Savior.”

Pentecost 2000 was launched in 1999 to encourage Synod congregations to take the Gospel to their immigrant neighbors.  Its goal was to start 1,000 new ministries by 2001.  When that goal fell short, the effort was extended for three years as “Pentecost 2000+.”

The P2K Web site, launched May 1, 1999, features a brief description of each cross-cultural ministry started, plus telephone numbers and e-mail addresses for contact persons.  Entries include ministries such as English-as-a-second-language classes, food pantries and job-skill seminars.

“LCMS members share their faith because the spirit of Christ, the spirit of Pentecost, lives in them,” said Dr. Robert Scudieri, associate executive director for LCMS World Mission’s national mission team and a P2K leader.  “They have ‘Pentecost eyes’ that see all people as God’s people.”

A special event to praise and give thanks to God for the success of the Pentecost 2000/Pentecost 2000+ effort will be held July 9-10 in St. Louis.

The event, “One People — Many Faces,” will bring together Lutherans from a variety of ethnic backgrounds for worship and study.