Although they haven’t moved an inch physically, Concordia Seminary and Concordia Historical Institute (CHI) on the St. Louis seminary campus have new addresses on a new “main street.” 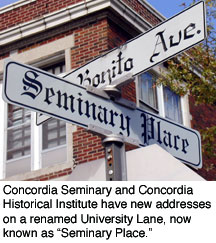 street address — also its new mailing address — is now 801 Seminary Place, and CHI’s is 804 Seminary Place.  The street is actually the former University Lane, which runs north off Clayton Road beside the campus’ recently acquired property at the former Christian Brothers College High School site and into the campus.  The seminary’s address previously was 801 DeMun Avenue — a street on the east border of the campus.

The only address on the campus that hasn’t changed its street name is that of Radio Station KFUO, which remains at 85 Founders Lane.  The entire campus also keeps its 63105 ZIP code.  Behind the street sign in this photo is a seminary-owned apartment building.