Synod convention delegates are getting lots of mail

This year’s LCMS convention will be Rev. Neil Hayen’s third in a row as a voting delegate.  He says that the amount of pre-convention mail he has 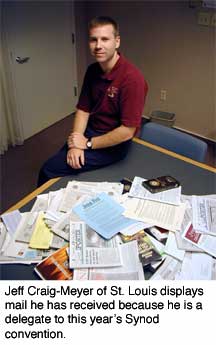 been getting doesn’t seem any greater than before, but it does seem more negative in tone.

“There is more negativity than in previous years,” said Hayen, pastor of Zion Lutheran Church in Mallard, Iowa.  “There’s always a little bit of that, but there’s more this year.”

Hayen and six other delegates were picked at random by Reporter and contacted about the convention-related mail they have been getting.  Reporter also asked Jeff Craig-Meyer, a lay delegate from St. Louis who works in the Synod’s International Center, to bring in the mail he has received.  He brought in nearly a box full.

“I had heard a lot about synodical conventions, and people had warned me that my mailbox would overflow,” Craig-Meyer said.  “It is quite overwhelming.”

Some of the mail is official — the Convention Workbook, for example, and housekeeping details such as travel and lodging information.  There was other synodical mail, too, including several issues of Reporter.

Groups with such names as “Lutherans United,” “Consensus” and “Jesus First” sent newsletters promoting their choices for election to various offices, including president.  Some promote First Vice President Daniel Preus for the office; others support the re-election of President Kieschnick.  They also give differing takes on such issues as good leadership; Atlantic District President David Benke’s role in the post-9/11 “A Prayer for America” at Yankee Stadium; and the authority and actions of the Synod’s Board of Directors.

First-time delegate Mary Depuy of Yuma, Ariz., said the mail has been bringing her “everything from rational analysis to backbiting and name-calling materials.”

“I have to admit that I’m a little disappointed there’s as much printed contentiousness as seems to exist,” said freshman delegate Rich Balvanz of Marion, Iowa.  Still, he said the mail has an up side:  “It does clarify positions, there’s no question about that,” he said.

Steven Krone of Westlake, Ohio, who also will attend his first Synod convention, said the mailings haven’t changed his “basic views,” but added that they have “encouraged me to dig into some of these issues more.”

“Most of this stuff I’m just throwing out because I just can’t keep up with it,” said third-time delegate Rev. Clifford Gade of Florence, S.C.  He indicated that there’s enough with the Workbook and other official materials.

But most of those with whom Reporter spoke said they were reading most or all of what they received, though some said they had not yet viewed the videos.  Besides the two tapes from Christian News, they also received one from a video-sales firm in Dallas, Texas, that features Preus and accompanies a copy of a book he recently wrote, and another, from the Board of Directors, that discusses the work of the Synod and its funding.

“There’s a lot on the plate this year.  I figure I’m a delegate, so it’s my responsibility to read all of it,” said first-timer Robert Jahns of Colona, Ill.  He added, though, that he didn’t think he would get through the larger of two books, at 506 pages, sent him by Christian News.

There are some things that Depuy said she wouldn’t read.  “I scan them for tone.  If it’s rabid, I don’t read it,” she said.

Rev. James Markus of Shelton, Wash., a delegate also in 1998, said he will study the first issue of Today’s Business, which contains the resolutions that the floor committees are proposing for convention action, then see what in the other mailings speaks to the issues at hand.

Depuy added that voting lists from various groups have no influence on her.  Asked how she would decide for whom to vote, she said she would pray and discuss it with her pastor, others in the congregation and her husband.

“It comes down to what I can find out about them,” Depuy said of the nominees.  She said she plans to research them on the Internet and hopes to ask them questions at the convention.  “I will use my instinct, and first and foremost, pray,” she said.

So how does a delegate separate fact from opinion, or fiction?

“If someone’s quoting the Bible, it’s not hard to look up,” said Jahns.

“It comes down to the people you know on one side or another,” said Markus.  “You may trust them, or you may have seen things that lead to distrust.”  He added that he would talk to his district’s advisory delegates and his district president.

Balvanz said that there are “very genuine concerns about the direction the Synod could take if it’s not careful.”  But “from what I’ve read,” he said, “I haven’t found either side to be careless.

He added, “Being careful does not necessarily mean we have to be at each other’s throats in the meantime.”