ST. LOUIS — The Lutheran Church—Missouri Synod today (July 12) formally declared that it is in church fellowship with the Evangelical Lutheran Church in Kenya (ELCK). 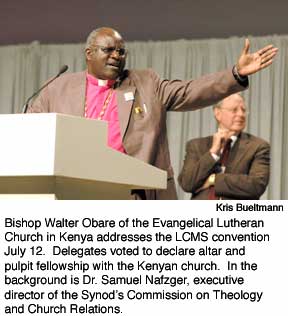 of praise to God as they voted by an overwhelming majority — 1,074 to 107 — to declare altar and pulpit fellowship with the 70,000-member East African church body.

The declaration recognizes agreement in doctrine and practice between the two church bodies and permits the members of each to commune at the other’s altars and for their pastors to exchange pulpits.

“We have been happy and privileged to find the troops of Christ, as portrayed in Psalm 110, arrayed over here under His banner and according to the true faith, the pure doctrine,” ELCK Bishop Walter Obare told the delegates after the vote.  “This is the reason — this alone — that we have approached you and extended out our hand to you, asking for cooperation and fellowship.”

Obare spoke at length about the challenges facing the Christian church in the world today.  In the West, he said, the challenge often is secularism.  In Africa, it is Islam.  Opposition to either may lead to suffering.

“We must not fear suffering,” he said.  “We know in the Word of God that God’s Zion stands in the midst of God’s enemies.”

Obare encouraged mission work in Africa and commended “Ablaze!,” the initiative of LCMS World Mission to reach 100 million unreached people with the Gospel by 2017, the 500th anniversary of the Reformation.

“We have had many contacts with this church,” Dr. Samuel H. Nafzger told the convention before the vote.  Nafzger, executive director of the Synod’s Commission on Theology and Church Relations (CTCR), added that representatives of the two church bodies met in Nairobi, Kenya, and in St. Louis for formal fellowship talks.  The CTCR in February voted unanimously to recommend that the Synod enter into fellowship with the ELCK.

Among issues discussed by the church bodies was the ELCK’s membership in the Lutheran World Federation (LWF), of which the Missouri Synod is not a member.  Nafzger said that the ELCK does not consider itself to be in church fellowship with other LWF members simply by virtue of that membership, “so that shouldn’t stand in the way.”

Nine other “partner churches” of the Synod also are LWF members, according to the preamble to the resolution that declared fellowship.

The only question raised from the convention floor asked whether other Lutheran church bodies around the world with which the Missouri Synod is in fellowship have been asked for their views on declaring fellowship with the Kenyan church.  Nafzger replied that all such church bodies have been contacted and all that responded did so positively.

The ELCK has 110 pastors and 440 congregations.  Its roots are in mission work begun in 1948 by Scandinavian mission societies.