About five minutes after an American walks into a home in Pakistan, his Muslim host likely will be pulling out the Quran, eager to explain its teachings.

“Witnessing is a priority for them,” said Rev. Steve Hughey, director of the Mission Responders Net 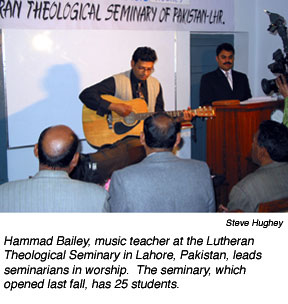 work with LCMS World Mission, who returned home Feb. 2 after spending nearly three weeks in Pakistan.  Hughey led a seminar on “healthy churches” at the new Lutheran seminary in Lahore.

“Islam is much more evangelistic than I had been led to believe,” said Hughey.  “Everywhere we went, we had people witnessing to us and asking, ‘Would you like to learn more about Islam?'”

Although Christian proselytizing is outlawed in the overwhelmingly (97 percent) Muslim country, Christians may respond to questions about their faith and pose questions to Muslims, he said, which happens quite frequently.

“There are lots of opportunities to share [the Gospel] just because they open the door,” Hughey said.  Dialogue is “no problem” — the problem is being able to follow up with every person who wants to talk, he said.

Hughey said there is “a growing number of Lutheran Christians in Pakistan,” and he credits the work of People of the Book Lutheran Outreach, a Muslim-outreach society based in Dearborn Heights, Mich., that is working in Pakistan, Afghanistan, Bangladesh and India.

The Lutheran Theological Seminary of Pakistan, situated right next door to a mosque in Lahore, now has 25 students, Hughey said, and Lutheran congregations are beginning to form.

Like their Muslim counterparts, Pakistani Christians also surprised Hughey by their eagerness to share their faith, he said.

Webzine offers guide to 'Passion of the Christ'