LCMS World Mission has set up a new Web site to track Ablaze! activities worldwide.  The Web site — www.lcmsworldmission.org/ablaze — is set up to record the number of people with whom LCMS and partner church members 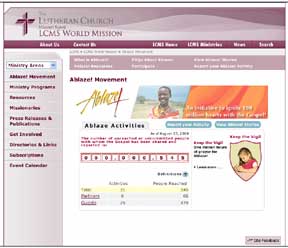 have shared the Gospel of Christ, and the ways in which they are sharing their faith with others.

The site also offers resources for taking part in Ablaze!, and provides answers to “frequently asked questions” about the initiative.

Ablaze! is a vision of LCMS World Mission to share the Gospel with 100 million people “unreached by the Gospel or uncommitted to Christ” by 2017, the 500th anniversary of the Reformation.

Leaders of the Synod’s 29 partner/sister churches in other countries have been invited to participate, along with virtually every LCMS entity in North America, including districts, schools, recognized service organizations, auxiliaries and mission societies.

While many Synod members are excited about Ablaze!, its goal of reaching 100 million people has been called “impossible” and “unrealistic” by others, acknowledged LCMS World Mission Executive Director Robert Roegner.  He says he has fielded “a lot of questions about how we will count” 100 million witnessing opportunities.

That’s the beauty of the Web site, he says.  There, visitors can report the number of times they have shared their faith with others — 545, at this writing — and how they did it.  Several witnessing stories already have been posted on the site, and they range from simple one-on-one sharing to organized group events.

“Personal witness to an awning salesman who has dropped away from the Roman Catholic Church,” reads one from Kansas City, Mo.  “I shared the importance of letting Christ be the focus of our lives.”

Another, from Jacksonville, Fla., says simply, “I shared the Gospel with someone who is struggling to know God.”

Every Gospel witness is precious, says Roegner, who is asking every LCMS member to take part in Ablaze! and to share their experiences on the Web site as a resource and encouragement for others.

This month, LCMS World Mission is mailing to the Synod’s 6,142 congregations an Ablaze! reporting form that may be reproduced and distributed to those who do not have Internet access so that they, too, may share their activities.  The completed form may be mailed or faxed to LCMS World Mission, Roegner said.

The system is set up to record the number of people “presented with a clear Gospel message and [who] were given an opportunity to respond,” according to Roegner.  That “response” can include accepting the message, rejecting it, or asking for more information, he said.

In other words, if a congregation distributes 1,000 fliers to its community, the 1,000 fliers would not count.  But any inquiries that come as a result of the fliers and open the door for the congregation to share the Gospel personally with an unreached or uncommitted person would count toward the 100 million goal.

“It is the Spirit’s work to create faith in the hearts and minds of those who hear the Good News of Jesus,” Roegner said.  “But it is our work, commanded by God, to share that Good News.”

A statement from LCMS World Mission titled “Why count?  Why report?” explains why those who share their faith are also being asked to share their experiences on the Web site:

“Their reports will remind us that our God is a living and active God who uses the words of His people to perform that greatest miracle of all, planting the seed of faith in the hearts and minds of those who do not know Him,” the statement reads.  “Their reports will also remind us of what we can all do and say, simply sharing what we know of the great things God has done with the people around us.

“They will remind us that God uses us, just as we are, to spread His Word in the world.”