Recent court cases and legislative actions in Canada have legalized same-sex marriage in that country and limited the rights of Canadian citizens to speak out publicly against homosexuality, even on religious grounds.

Most Americans, and a great many Canadians, are unaware of the potential impact these changes in the law have for churches and professional church workers.  While these legal developments do not affect American churc 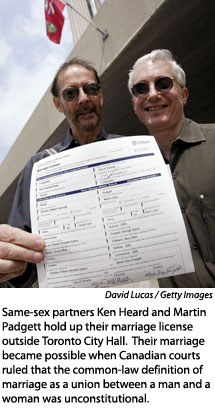 hes directly, they do provide a cautionary tale that should give American Christians pause to consider the implications of likely eventual parallel developments in American law.

In the spring of 2004, the Canadian legislature passed a bill, known as C-250, that added sexual orientation to the list of groups receiving special protection under sections 318 and 319 of the Canadian criminal code.  Of particular concern to churches are certain provisions of 319 that criminalize any “communicating statements” made in a public place (including church buildings) that could be interpreted as inciting hatred on the basis of sexual orientation.

This provision omits the protection for religious speech that is an allowable defense under other sections of the law.  While Canadian officials have emphasized that clergy will not be targeted for prosecution under this law, it is both noteworthy and troubling that Canadian courts have ruled that certain passages of the Bible, when publicly proclaimed, by their very nature expose homosexuals to hatred (Owens v. Saskatchewan).

Further, it is doubtful whether the limited protections of religious speech contained in the law would be interpreted in such a way as to protect the religious-speech rights of lay members and other non-clergy church workers in Canada.  While part of the standard for conviction under the statute is the demonstration that such an incitement “is likely to lead to a breach of the peace,” this provision is vague enough and examples of actual violence against homosexuals are common enough that there can be little expectation of protection under this provision.

In July 2005, the Canadian legislature, following a string of decisions by the courts, passed another bill, known as C-38 (or the “Civil Marriage Act”), that legalizes the marriage of same-sex couples nationwide. Although amendments to the bill protect clergy from prosecution if they refuse to perform same-sex marriages, the law (in conjunction with a string of Canadian court decisions) leaves churches and other religious groups liable to legal action if, for example, they refuse to rent out their facilities to same-sex couples for wedding receptions or other activities related to the celebration of such a marriage.

In addition, churches and religious organizations have no protection under Canadian law if they attempt to take same-sex marital status into account in decisions on employment and membership.  Moreover, combined with the provisions of C-250 and the supporting court cases described above, the possibility exists that any public statements in opposition to same-sex marriage could potentially be construed as an incitation to hate.

For many Christians, Canadian and American alike, the immediate reaction to such legal developments is the feeling that we must do something to restore the civil law to the “Christian principles” upon which our countries were founded.  But though the desire to have godly laws is praiseworthy, this reaction raises an important theological issue that distinguishes Lutherans from other conservative Christians.

Unlike Calvinism, Lutheran theology recognizes that the laws that God gave to govern Israel in the Old Testament were given specifically for the purpose of governing Israel, and not to provide a paradigm for the civil laws of other nations.  Lutherans understand that it is a misapplication of the Bible to claim that the civil laws of America or Canada must reflect the legal code that God gave to Israel.  If, then, as Lutherans, we cannot follow our Calvinist and Evangelical friends down the road that might lead to the establishment of an American theocracy, on what theological basis can Lutherans work to uphold the Biblical truths about marriage and homosexuality?

Within the church, we must continue to emphasize that the Great Commission of Christ obligates the church to teach those who would be disciples of Jesus to keep all that God has commanded (Matt. 28.19-20).  To be truly missional is not merely to be concerned with numerical growth in the church, but to be committed to nurturing Christians as mature disciples, including an understanding of and adherence to what God teaches regarding marriage and human sexuality, including the issues of divorce and promiscuity among heterosexuals.

Outside the church, in the civil arena, Lutherans should work to uphold marriage and reject the acceptance of homosexuality as an acceptable “alternate lifestyle” on the basis that marriage as the lifelong union of one man and one woman is the best arrangement for emotional, physical, and economic welfare of men and women; for the nurturing of children; and for the stability and welfare of society as a whole.

While we ourselves may indeed know this on the basis of the special revelation of God’s Word, we must work to persuade others, especially those who do not know or accept God’s Word, that this is so on the basis of reason in accordance with nature for the common welfare of all.  Moreover, the church should continue to speak strongly in protection of religious liberty, not only for the church as an institution and for its pastors, but also for other professional church workers, for auxiliary religious organizations, and for its lay members.

In short, then, Lutheran Christians can and should become active in efforts to preserve marriage as the lifelong union of one man and one woman in America.  We ought be bold to condemn homosexuality as a sin despite the increasing social pressure to acquiesce in the acceptance of homosexuality as an acceptable “alternate lifestyle.”  But Lutherans must do these things as Lutherans, that is, in a way that is consistent with what the Bible teaches about the way that Christians individually and the church collectively should conduct themselves in civil society under the Word of God.