Total enrollment at the Synod’s 10 Concordia University System (CUS) schools continues to climb, and this fall’s 18,569 for both undergraduate and graduate programs sets a new record high, with nearly 1,000 more students than last fall.

Like last fall’s enrollment increase of about the same number of students, this year’s growth is due to the popularity of CUS graduate programs, primarily for teachers.  W 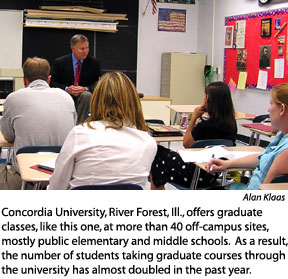 Dr. William Meyer, retiring executive director of the Synod’s Board for University Education and past president of the CUS, calls the trend a “national phenomenon.”

Undergraduate enrollments in the United States are expected to continue falling through 2010, Meyer says, because of demographics — there are simply fewer college-age young people.  At the same time, the number of graduate students keeps climbing, he said, because of a “shift in emphasis in American education.  Today, an undergraduate degree is not enough.  People — and employers — believe more education than high school and college is needed.  Subsequently, graduate education has really increased.”

With advanced teaching degrees in demand, Meyer says the Concordias are in an ideal position to fill the need “because we’re recognized for teacher education — that’s one of our main emphases.”

Concordia University, River Forest, Ill., saw a 20-percent increase in students in fall 2004 — after a 100-student drop the year before — because of a major push to recruit graduate students.  In the past year the school’s enrollment has grown from 2,056 to 2,783 — an increase of 727 students, or 35 percent.  It is the largest enrollment in the school’s 147-year history, say administrators.

That dramatic growth — nearly twice as many additional students as all the other CUS schools combined — is due to its wildly successful graduate program, which “takes its classes to the teachers” at more than 40 off-campus sites, mostly public elementary and high schools.

As a result, the number of students taking graduate courses through the university has almost doubled — from 922 last year to 1,751 this fall, an increase of 90 percent.  Many are earning degrees that will enable them to serve as administrators in public elementary and secondary schools in Illinois.

Concordia, River Forest, is the largest trainer of school administrators in the state, according to President John F. Johnson.  “We feel that this successful program will benefit education in all of Chicagoland as so many future administrators are being prepared by Concordia,” Johnson said.

The growth in CUS graduate programs is “not only good but necessary, if you want to remain viable,” says Meyer.  Another plus is the “influence the schools have on American society,” he says, since CUS graduate programs require students to take religion.  Because many of those graduate students received their teacher certification at public universities, they may be getting their very first lessons in Christianity, making the graduate programs bonafide outreach tools, according to Meyer.

CUS schools also are looking at offering more courses online — particularly those in the graduate programs — and leaders from each of the schools are expected to discuss how they can work together to further that prospect during their annual meeting early this month, Meyer said.

Among other noteworthy aspects of this fall’s CUS enrollment figures:

This fall’s enrollments (both undergraduate and graduate) at the CUS schools are as follows:

Preliminary enrollment figures for the Synod’s two seminaries combined is down slightly — from 1,216 last year to 1,181 this fall, a drop of 35 students, or 3 percent.