Despite a weekend storm that dumped up to two feet of snow over much of the East Coast and Midwest, an estimated 100,000 people — including 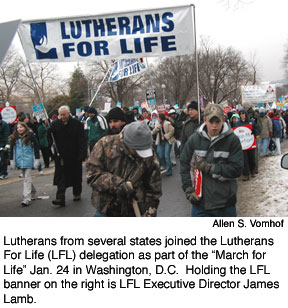 a delegation from Lutherans For Life (LFL) — took part in this year’s “March for Life” Jan. 24 in Washington.

Dennis Di Mauro, president of the LFL’s Northern Virginia chapter, blamed the weather for a lower turnout than last year.  But he added, “It is still overwhelming to be among so many who respect God’s gift of life.”

The march is held annually in conjunction with the anniversary of the 1973 U.S. Supreme Court decision that legalized abortion in the United States.

On the morning of the march, nearly 40 Lutherans from several states joined Di Mauro for worship at St. Paul Lutheran Church in Falls Church, Va., to prayerfully observe the 32nd anniversary of the Roe v. Wade decision that legalized abortion.

In his sermon, based on John 1:1-5, LFL Executive Director James Lamb explained why Christians should be involved in life issues.

“We have a positive message of life, a message of help and hope and healing,” Lamb said.  “It is a message that can make a difference in the lives of people dealing with the difficult issues of life and death.

“There is no time for indifference when we have the only message that can make a difference — Jesus, the Word of Life.”

Lamb said later that he considers the pre-march worship service as the “best part” of March for Life activities.

“It emphasizes what Lutherans For Life is really all about — witnessing to the sanctity of human life based on the Word of God,” he said.

Lamb said he views the march as an opportunity for Lutherans to take their Word-based convictions into the public square.

Most of those who attended the morning worship service also attended the march, including some two dozen teenagers from Lutheran high schools in St. Louis and St. Charles, Mo.

Kelly Carter, a student at Lutheran High School South, St. Louis, and a first-time marcher, said, “I just think it’s awesome to see so many people gathered for such a great cause.”

Carter was one of three Lutheran South students who attended the march with teacher Mike Albers.

Albers, who has marched before, said he brings students with him “so they can experience what I have [experienced].”  He takes part in the march to “support the gift of life myself in this way,” he said.

Speaking via telephone from Camp David, President George W. Bush assured marchers that his administration is working with members of Congress “to promote a culture of life, to promote compassion for women and their unborn babies.”

Addressing the crowd at the beginning of the pre-march rally on the Ellipse, Bush highlighted laws passed during his first term, such as the Partial-Birth Abortion Ban Act and the Unborn Victims of Violence Act.

“The America of our dreams, where every child is welcomed in law [and] in life, and protected in law may still be some ways away,” he said, “but even from the far side of the river we can see its glimmerings.”

Lamb said the president reflected the focus of LFL when he told pro-lifers that they are on the road to “change hearts and minds” of those who favor abortion.

Since its legalization 32 years ago, abortion has ended the lives of more than 44 million unborn babies in the United States, according to Lamb.  “That horror continues at the rate of over 3,250 every day,” he said.  “God’s people need to do all they can to bring an end to the atrocity of abortion and restore a sense of the God-given dignity and value of human life.”