Responding to weary after Wilma`s wallop

Florida’s eighth hurricane in the past 15 months transformed one LCMS church into a refuge for “absolutely weary” evacuees the same day it turned another storm-battered church into a pile of rubble.

Our Savior Lutheran Church, in Lake Worth, collapsed in the 125-mph winds of Hurricane Wilma, the Category 3 storm that darkened the Sunshine 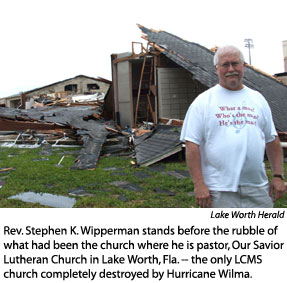 To the west in Port Charlotte, 17 members and neighbors of Lutheran Church of the Cross rode out Wilma in that church’s new Fellowship and Ministry Center.  Many of those evacuees suffered major property damage in last year’s Hurricane Charley and “were terrified about what might happen this time,” Pastor Kenneth Redmann said.

“Our people are absolutely weary of all these hurricanes and on the edge emotionally,” Redmann said.  “We gathered together because there is strength in numbers; we could pray and call upon the Lord.  You never know for sure, but this is a brand-new structure that was built to be safe.”

As this Reporter went to press, Wilma was blamed for six deaths and an estimated $6 billion in devastation.  Massive power outages and limited cellular phone service hampered early damage reports from many LCMS churches and schools.

The state’s southeastern coast was among the hardest-hit areas, according to Rev. Carlos Hernandez, director, Districts and Congregations, with LCMS World Relief and Human Care.  Hernandez arrived in Florida on Oct. 24 to offer pastoral care and begin needs assessments.

“These people have been through so much, it is important to get on the ground right away and offer our support,” said Hernandez, who planned to visit affected LCMS congregations with David Weidner, executive director for Congregational Services and coordinator of Disaster Response for the Synod’s Florida-Georgia District.  “We want to bring some immediate relief to our hardest-hit churches.”

At press time, one such church was Our Savior in Lake Worth.  Three previous hurricanes had compromised the facility structurally, Weidner said, although it continued to be used by the congregation.  “There was a problem with the beams, and the church was working with engineers,” he said.  “They had been warned that (winds) over 75 mph would be a danger.”

According to a published report, a pulpit and a cross were among the few objects left in the demolished church, built in 1962.  “My life is gone,” Barbara McCrorie, 70, a church choir member told the South Florida Sun-Sentinel.  “I just love this church. This is heartbreaking.”

No injuries were reported in connection with the church collapse.

Other early reports of Wilma-related damage, supplied by Weidner, included:

Along with LCMS World Relief/ Human Care, other partners in the hurricane response effort include Lutheran Services Florida, Lutheran Disaster Response, and Lutheran Counseling Services of Orlando.  The latter organization has been providing ongoing counseling to hurricane victims since last summer.

David Weidner agreed that many Floridians have grown hurricane weary.  “We know that in spite of these natural disasters, our God remains faithful to us, and He will provide all that we need to recover and rebuild our churches, homes, and communities,” Weidner said.  “Over and over again, we are the recipients of His grace and mercy in Jesus Christ as manifested through the loving response and help of his people across the country.”

“The generosity of our people also has been unprecedented,” Harrison said. “We thank our supporters and our partners and ask that they, please, continue to support recovery and rebuilding which will continue for months, even years, to come.”