Dr. Carlos Walter Winterle, former president of the Evangelical Lutheran Church of Brazil, is now serving as a m 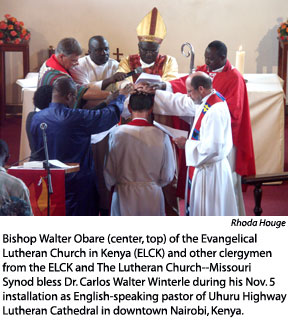 The congregation’s 200 or so worshipers represent a variety of ethnic groups, including American, Bulgarian, Hungarian, Dutch, Kenyan, Portuguese, Indian, Namibian, Tanzanian, and Ugandan.

Leading the installation was Bishop Walter Obare of the Evangelical Lutheran Church in Kenya (ELCK).  Obare was assisted by other clergymen from the ELCK and The Lutheran Church–Missouri Synod.  LCMS World Mission participants were Dr. Paul Mueller, regional director for Africa, and Rev. Claude Houge, area facilitator for East Africa.

Winterle will serve at least two years in the position, Mueller added, reaching out to the international community and developing future Kenyan leaders for the ministry.

“After serving the Evangelical Lutheran Church of Brazil as parish pastor for 25 years and as president for the last eight years, my wife, Lidia, and I are very happy with this opportunity to serve the Lord in Nairobi, Kenya,” Winterle told Reporter via e-mail.  “This was never in our plans, but it was in God’s plans.  Kenyan people are a very kindly people and we are feeling ourselves very confortable in doing this work.”