COP continues study on `leading together`

MILWAUKEE — With 10 new district presidents participating for the first time, the LCMS Council of Presidents focused on humility and forgiveness at its Sept. 14-18 meeting here.

That focus is the fourth of five principles the council identified four years ago in its overall theme of “Leading Together … for the Sake of Christ’s Mission.”

“It is God’s plan that all people live in humility,” Rev. Randy Raasch told the COP in his Bible study on the emphasis.  “Without humility, there can be no harmony,” said Raasch, pastor of First Immanuel Lutheran Church, Cedarburg, Wis.

Noting that Scripture defines humility as “lowliness of mind,” he said, 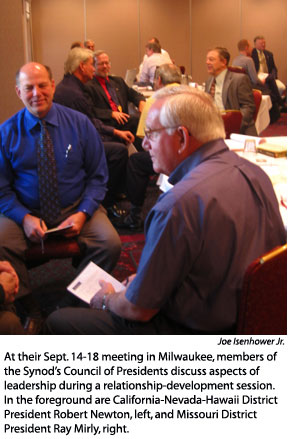 “The humble heart responds to God.  It never boasts except in the cross of Christ.”

Raasch used the Parable of the Prodigal Son to illustrate humility and forgiveness.

He noted that “it was about the father’s mercy” when the son returned home after squandering his inheritance.

“Are we who have been washed in the blood of the Lamb willing to forgive the wandering brother who seeks forgiveness?” Raasch asked.

“Humility is not our strong suit,” Dr. Patrick Ferry, president of Concordia University Wisconsin, Mequon, said to the council in a presentation following the Bible study.

Ferry referred to Phil. 2:4-8, which includes the passage that “Your attitude should be the same as that of Christ Jesus … .”

“The mindset of humility is looking out for the welfare of others, instead of ourselves,” Ferry said.  “Humility is the recognition that we’re not at the top of the world.”

Les Stroh of Cornerstone Consulting led the council in a relationship-development session in “normative behaviors and covenants.”

Defining such behaviors as standards, models, or patterns for a group, Stroh asked the district presidents and Synod praesidium members making up the COP to identify “norms that cause trust and openness, enhance task accomplishment, and help decrease the time to decide and act.”

He asked them to identify the most important norms from those they surfaced, as well as 41 that COP members suggested three years ago.

Stroh also challenged the COP members to “consider what pledge you are willing to make to your colleagues regarding your collegial relationships.”

In his report during the meeting, Synod President Gerald B. Kieschnick said that he was “very pleased” with the National Circuit Counselor Conference that ended just before the council meeting began.

“This is a very important group of leaders,” Kieschnick said of the conference participants, adding his hope that another circuit counselor conference might be held in the near future.

The COP members heard from its members who are on the Synod’s DELTO-oversight committee about the concept of a proposed “Pastor Supervised” alternate-route program in the Synod that would lead to ordination.

After that discussion, the council members voted unanimously to support the general direction of the concept as well as further study of the concept.

Dr. Robert Newton, California-Nevada-Hawaii District president and a member of the oversight committee with Michael, referred to the concept as “thoughtful and forward-looking.”

“It forms a genuine partnership between the seminaries and the districts,” Newton said.

Council members also reported placements of pastors and commissioned ministers in their districts and approved a number of reinstatements.

Among other business, the COP discussed the report of the Blue Ribbon Task Force for Funding the Mission with Dr. David Buegler, task force chairman and Synod fourth vice president.  That led to adoption of a proposal for a fiscal conference to be held as soon as possible next year.  The conference will involve district presidents and others, possibly including stewardship and fiscal leaders.

On Sunday, the COP met and worshiped at St. John Lutheran Church, Cudahy, Wis., where SELC District President Carl Krueger is a pastor.

The next meeting of the Council of Presidents is Nov. 14-16 in Orlando, Fla.