Concordia Publishing House will revise Concordia: The Lutheran Confessions, A Reader’s Edition following a decision from the LCMS Commission on Doctrinal Review to revoke doctrinal certification of the first edition published in 2005. 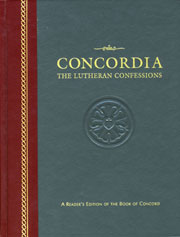 esident, and Robert M. Knox, chairman of the CPH Board of Directors, said CPH is working closely with the Doctrinal Review commission to prepare an amended and revised second edition and a supplement of revisions that should be inserted in or attached to the first edition.

Earlier this year, the Commission on Doctrinal Review made its decision to revoke the certification “because of numerous passages and features of the volume which are ‘inadequate, misleading, ambiguous, or lacking in doctrinal clarity’ (Bylaw 1.9.2.g).”

Nevertheless, the memo also said that “It is important to note that the Commission did not rule that Concordia contains material that disagrees with the Scriptures or the Lutheran Confessions.”

CPH released the book in 2005 and sold out its first printing of 40,000 copies. The book underwent doctrinal review prior to the printing, but doctrinal challenges were filed soon after its publication.  The procedures for such challenges are established by the synodical Bylaws.

“We have identified lapses in sound historical scholarship, ambiguous or questionable doctrinal statements and explanations, unexplained peculiarities in the translation and (perhaps most seriously) a general failure to distinguish clearly between what is actually the text of the Confessions and all other non-confessional material,” said the report.  It came from a three-member panel appointed by Dr. William W. Schumacher, chairman of the Commission on Doctrinal Review and a faculty member at Concordia Seminary, St. Louis.

“Many of these problems might have been overlooked or ignored in another kind of publication, since they do not involve direct statements of false doctrine,” the report continued.  “In the end, however, the panel decided that an edition of the Book of Concord should be held to a higher standard than other writings, because it will itself be used as a standard by which other books are judged and evaluated.  By that higher standard, we think the volume here under consideration stands in need of serious improvement.”

The review panel also said, “There is a great deal to celebrate and praise about the reader’s edition of the Lutheran Confessions.”  It noted that the historical commentary, timelines, and illustrations enable readers — especially laypeople — to explore the texts of the Confessions.

“The most important point in need of revision is the clear and unambiguous distinction throughout the volume between the actual texts of the confessional documents themselves and all other material (editorial introductions, historical explanations, section titles, Bible references inserted, etc.),” the panel said.  “In many cases this can be accomplished by changes in format or arrangement of the material (so that there are clearer distinctions than presently in the volume), or by specific attribution of editorial comments.”

The full report may be accessed at www.lcms.org/dr.