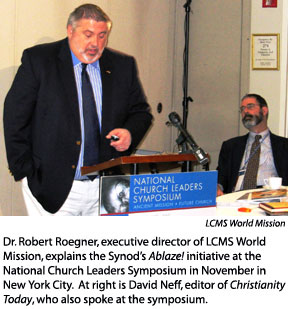 Roegner was one of four speakers at the invitation-only National Church Leaders Symposium Nov. 9-10 in New York City.  He explained the history and goal of Ablaze! — to reach 100 million people worldwide with the Gospel by 2017 — as well as the need for increased evangelistic outreach and the movement’s impact on the Synod and its partners.

“Participants included Baptists, Episcopalians, Catholics, Assemblies of God, leaders from a number of church backgrounds,” Roegner said.  “A number of them came up to me afterward and said they were amazed that a mainline church, that a Lutheran church, that The Lutheran Church–Missouri Synod, would be involved in such an outreach movement.”

Roegner said that those with whom he spoke cited three things that surprised them about the Missouri Synod and Ablaze!:

Roegner challenged participants to introduce something like Ablaze! in their own church bodies so that more people can hear the Gospel.

“My challenge to you is to use your leadership” to foster additional evangelistic movements “to the glory of Christ,” Roegner told the gathered church leaders.

The overall theme of the symposium was “Ancient Mission, Future Church,” described as “a wake-up call that the U.S. church must be on a missionary footing with respect to post-Christendom U.S. culture.”

Other speakers at the symposium were David Neff, editor of Christianity Today magazine; Dr. Peter Kreeft, professor of philosophy at Boston College; and Dr. Milfred Minatrea, director of the Missional Church Center, Baptist General Convention of Texas.  In addition to speaking individually, the four speakers also took part in a panel discussion.

The American Bible Society says that the National Church Leaders Symposium “informs, inspires, and equips church leaders for Scripture engagement in our emerging culture and the world.  We draw upon our collective skills, passion, and networks to create partnerships between the Bible Society and churches nationwide in order to see all persons experience the life-changing power of God’s Word.”