As always, the world offers “a huge opportunity to work with God in reaching people who are lost, who haven’t heard” the saving Gospel of Jesus Christ, says Erin Alter, placement counselor with LCMS World Mission.

In an effort to meet that vast need, the Synod’s mission board plans to launch this year a program that would match available “mission teams” of 10 to 15 people each with opportunities to serve worldwide.

LCMS World Mission plans to take advantage of that “people power” by using a “team ministry” approach.  At the same time, it expects to increase the 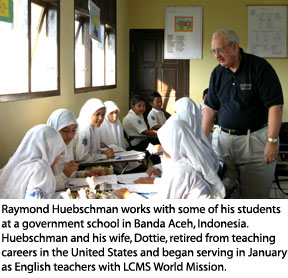 number of individuals it places into short-term mission assignments by about 300 — from about 550 in 2005 to some 850 people this year.  “Short-term” service is considered to be anything less than six months, and most opportunities to serve would last a week or two, according to Bruce Wall, who will manage the team-ministry program.

Wall said he is working right now to arrange for a U.S. college professor and his students to set up a computer system on a mission field in Nigeria, West Africa.

The new program is open to “groups of people who feel called to serve in God’s kingdom,” Wall said.  Opportunities for service may include leading Bible classes, training electricians or mechanics, doing construction, or even shooting video and taking photographs of mission-field work.

“We’re just waiting for the fields to tell us what they need,” he said.

Mission teams would pay their own airfare and expenses, and LCMS World Mission would “connect” the group to a mission field with specific needs, help them secure visas and travel documents, and share information designed to help prepare them for service in that particular country.  Teams also can be matched to U.S. sites, such as hurricane-damaged areas in the southern part of the country, he said.

Wall said he is hoping that congregations will sponsor teams to the same fields year after year, developing long-term relationships with the people there, and that the work will give the first-time missionaries “a heart for mission” and a willingness to continue — or expand — their mission involvement “to drive the Ablaze! movement forward.”

As a bonus, Wall said short-term mission service often gives the workers experience — and the confidence — to share their faith with others.  Many return thinking, “If I can share my faith there, why can’t I do it at home?” he said.

Workers are still needed for long-term (six months or longer) service, according to Alter, even though more and more long-term missionaries are deciding to extend their service.

Of the 80 or so long-term missionary positions available at the start of this year, only about 50 remain — the other 30 have been picked up by missionaries who’ve decided to extend their service, a phenomenon that has become more common in recent years, she says.

“God is using them and working through them, and they want to continue being a part of that,” Alter said.

Elizabeth Mowery of Ballwin, Mo., is only 23 but she’s already extended her missionary service.  Now on a 10-month assignment teaching English as a foreign language in Salta, Argentina, Mowery previously served four months in Guatemala and 10 months in Buenos Aires.

“I go back because I love the people,” Mowery told Reporter in an e-mail interview.  “And the opportunity for service is so perfect for using English as an outreach in Salta, Argentina, because of a booming tourism industry.”

Mowery said she “definitely” feels called by God to serve in Argentina “because of my language abilities [and] the desire He’s given me to share with people of other nationalities.”

And, she adds, she hasn’t ruled out becoming “a missionary for life,” but admits, “only God knows the answer!”

In contrast, only about 60 “career” missionary “units” (a “unit” is an individual and family members) are serving “calls” from the Synod’s mission board.  Career missionaries, who typically serve 10 years or more, are more involved in such things as field strategies and goal-setting, church planting and leadership development, according to Alter, while long-term missionaries most often teach English and Bible-study classes, witnessing their faith through personal relationships with the people they serve.

Alter says she’s never seen a case “where somebody is very qualified and they really have a heart for going to serve and have not been able to raise the money — they’ve always been able to.”

“People want to give, they have a heart for giving, but they want to know who they’re giving to,” she said of sponsoring congregations.  That connection is beneficial for the missionaries, who don’t have to pay expenses out of their own pockets, as well as the sponsors, who are “getting much more information and knowing more about what God is doing in the world, and what God is doing through them and their support,” Alter said.

Ryan Tinetti of Good Shepherd Lutheran Church in Lake Orion, Mich., has been teaching English in Bangkok, Thailand, for six months and has two months to go.  Tinetti, 22, who plans to enter Concordia Seminary, St. Louis, this fall, says he has had “countless opportunities” to share the Gospel in his host country.  “God is moving and shaking” and making a difference there, “no question,” he says, “and I get a glimpse of it now and then.”

Having opportunities “to proclaim the incredible message of God’s grace to folks who become your friends — not just faceless statistics on the other side of the world — is simply awesome,” he says.