Responding to a March 23 tornado called “the worst in history” for the city of Clovis, N.M., LCMS World Relief has 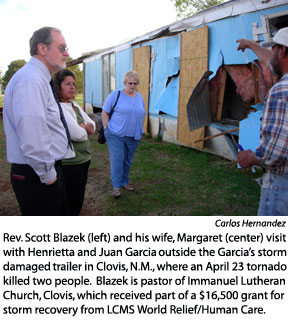 given an emergency grant of $16,500 for relief work there.

Clovis, with a population approaching 40,000, is at the east-central border of the state.

The homes of two members of Immanuel Lutheran Church, Clovis, were damaged by the storm that caused two deaths, 35 injuries, 100 homes and businesses destroyed, and about 500 homes damaged.  President George W. Bush and New Mexico Governor Bill Richardson declared Curry County — in which Clovis is located — a disaster area.

Among those most heavily affected were lower-income Latino families –- many with jobs on area dairy farms, and who live in mobile homes and older houses.  Those types of housing and dairy farms around Clovis sustained heavy tornado damage.

To help with recovery, LCMS World Relief/Human care gave a $16,500 emergency recovery grant for the following:

The two Immanuel members with damages to their homes are Velma Zoch and Dale Miller.  Miller is one of the area’s dairy farmers who together lost a total of about 300 cattle to the tornado.

“I was impressed with Pastor Scott [Blazak] and his wife, Margaret, and how easily they move in the larger Clovis community, where he has served as pastor of Immanuel for 17 years,” Hernandez said.  “They are concerned with their congregation members affected by the tornado, but also with those most vulnerable to [it] … .”

Hernandez said that after word got around that Immanuel was particularly concerned about helping tornado victims in Clovis’ Latino community, increasing numbers of them began contacting the congregation.

“It is also an opportunity for us to witness to them and to share the Gospel as we have opportunity,” Blazek said.

While in Clovis, Hernandez attended a meeting of church, government, social-service, and business representatives — to address long-term needs of those with losses from the tornado.  That meeting resulted in formation of the Eastern New Mexico Relief Council, to direct recovery efforts there.

Hernandez said that he also contacted Chaplain Jim Robinson, director of the LCMS Rocky Mountain District’s disaster team, and Jim Barkley, executive director of Lutheran Family Services of Colorado (an affiliate of Lutheran Disaster Response, in which the Synod participates with the Evangelical Lutheran Church in America).

Case management was identified as a critical need,” Hernandez said of his meetings with other area and Lutheran representatives.

Hernandez said that Immanuel and the Rocky Mountain District disaster team will keep in close contact with each other and LCMS World Relief/Human Care throughout the community’s recovery, which could take up to a year.

He added that in the immediate cleanup after the storm, 65 tons of debris were trucked away for disposal.

To donate toward tornado relief in the Clovis area, make checks payable to LCMS World Relief and send them to LCMS World Relief, P.O. Box 66861, St. Louis, MO 63166-9810.  Write “Clovis Tornado” in the memo line.  Gifts also may be donated securely online at http://worldrelief.lcms.org or via telephone by calling (888) 930-4438.