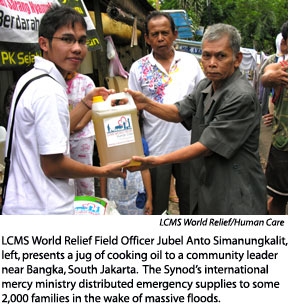 Darin Storkson, LCMS World Relief/Human Care’s regional director in Asia, said weary families saw other relief agencies responding only to their own people and “were surprised that we helped all people in need.  They appreciated that we as the church were reaching out to them.”

Torrential rains and flash floods forced more than 400,000 people from their homes in early February, submerging as much as 70 percent of this capital city.  People waded through filthy water up to their necks and awaited rooftop rescues.

Despite its own loss of communication tools, LCMS World Relief/ Human Care’s regional office in Jakarta organized an immediate response, distributing more than 3,600 kg (about 4,500 pounds) of rice plus thousands of boxes a 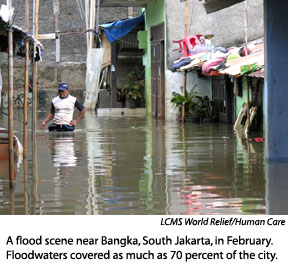 nd crates of milk, noodles, and other foodstuffs to about 2,000 families.

Two weeks after the flooding began, Storkson said the water had receded but huge needs continued.  A quarter-million Indonesians remained homeless.  At least 57 deaths were blamed on what has been described as Jakarta’s worst flooding in years. 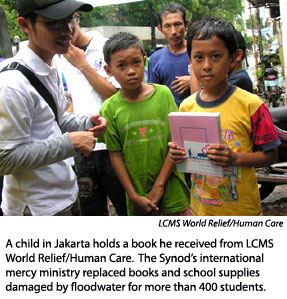 h partner congregations of the Protestant Christian Batak Church (a church body with Lutheran affiliations) in Indonesia to identify other needy families.

“We had a huge rain again today, and the monsoons can continue until mid-March,” Storkson said in a telephone interview Feb. 16.  “Even as people try to clean up and get back in their homes, if they have homes left, there’s the potential for more flooding.”