Seven LCMS pastors, professors, and other theologians were among a select group of scholars who presented their work on Martin Luther at the 11th Internati 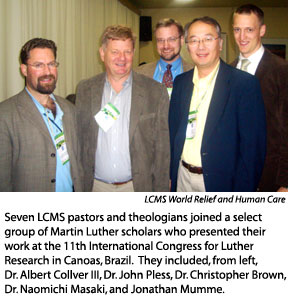 The men joined 109 Luther scholars from around the world at the prestigious conference, which is held every five years.  Presentations included writings and translation projects on the life and works of the leader of the Reformation, the movement that led to the birth of the Lutheran church.

Works delivered at the congress, Pless said, will “bring Luther into the orbit of people in the pew” throughout the globe.  “Luther remains the center of much historical investigation and still speaks with a vibrancy about Christian faith and Christian life that continues to hold universal appeal,” Pless said.  “It was a great honor to rub shoulders with so many fine scholars and increase my own capacity to teach and to incorporate Luther into my own classroom in Fort Wayne.”

The gathering drew participants from Asia, Africa, Europe, and North and South America.  It marked the first Luther congress ever held in the Southern Hemisphere, a reflection of Lutheranism’s growing presence in that part of the world, said Dr. Albert B. Collver III, executive pastoral assistant, LCMS World Relief and Human Care.

“It shows the shift of the Christian church and the role of Lutheranism, which is growing in the Southern Hemisphere and struggling in Europe,” said Collver, whose presentation was titled “The Common Chest of 1523: Motivations from the Gospel.”

The Evangelical Lutheran Church of Brazil, an LCMS partner church, hosted the congress.  “This was a wonderful opportunity to see how alive Lutheranism is in Brazil, in particular, and to see great possibilities for working with our partner church in the future,” Collver said.

Participants were invited to the Luther congress based on their research, writings and teachings in Reformation studies.

The LCMS had “a strong presence” at the international conference, Collver said, that also included:

Dr. Robert Kolb, of Concordia Seminary, St. Louis, was unable to attend the conference due to medical problems, but he scored a congress first when he gave his presentation via the Internet.  His paper was titled “Models of Christian Life in Luther’s ‘Genesis’ Sermon and Lectures.”

Five additional Concordia Seminary, St. Louis, faculty members also were invited to the conference but declined the opportunity after their aircraft, traveling over the Amazon rainforest, was ordered back to the United States in the wake of the Brazilian jet crash that killed nearly 200 people just days before the conference.  They are Dr. Charles Arand, Dr. Gerhard H. Bode, Dr. Erik Herrmann, Dr. Paul Robinson, and Dr. William Schumacher.

The next Luther congress is scheduled for 2012 in Helsinki, Finland.