Lisa Ogbesoyen grew up in a St. Louis inner-city Lutheran church and grade school where she learned to read, to write, and to care about her neighbor.

That’s why the St. Paul Lutheran Church member is participating in an initiative that she hopes will strengthen both her dwindling urban congregation and the 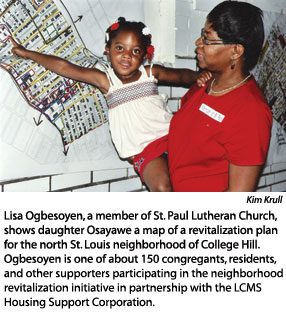 “The church is more than just what goes on inside a building,” said Ogbesoyen, one of about 150 supporters at the June 21 unveiling of concept plans for the “Campaign for College Hill” neighborhood revitalization initiative.  “The church also must be part of what goes on beyond those walls and be a vital part of the community.”

The LCMS was the first denomination to commit financially to that Nehemiah effort that is now a celebrated model for neighborhood restoration.  “The LCMS is a leader with a rich history in community revitalization,” Kienker said.  “When St. Paul came to us five years ago, they said they wanted to do a Nehemiah-type initiative.”

St. Paul was founded in College Hill in 1862.  The area is the home of about 3,500 residents.  It hosts one of St. Louis’ oldest homes and two “standpipe” water towers that are local and national landmarks.

Preserving historic buildings and replacing the area’s many abandoned buildings and vacant lots with new houses and rehabbed existing homes is the focus of the renewal.  The plan also calls for the development of a business and entertainment strip, plus the addition of amenities such as a community/recreation center and bike trails.

Lutheran Housing Support, with funds provided by the Lutheran Foundation of St. Louis, arranged for urban design consultants to create the revitalization plans by working with College Hill residents and supporters.

The drawings will help “further organize supporters, volunteers and more stakeholders and build resources for funding projects and the mission,” said Rev. Juan A. Gonzalez, lead organizer for the Campaign for College Hill, who is planning a town hall meeting in October to solidify commitments and partnerships.

Supporters say they know that turning around a struggling neighborhood is a challenging, lengthy process.  But they believe College Hill can be “the St. Louis Nehemiah.”

Gail Olson, a board member of Humanitri, Inc., an LCMS Recognized Service Organization located in College Hill, says she saw “the possibilities” when she visited a Nehemiah-inspired community revitalization in Chicago near Ebenezer Lutheran Church.  Like St. Paul, Ebenezer is a longtime LCMS congregation that refused to abandon its deteriorating neighborhood.

“The living conditions had been horrible,” said Olson, referring to the Ezra Community Homes initiative in the North Lawndale area of Chicago.  “Now there are wonderful homes and neighborhoods.  The possibilities are the same for College Hill.”

Carmen Gamble, a College Hill resident and campaign leader, agrees.  “Finally, someone is giving us hope — someone who has the resources and expertise,” she said, referring to the Lutheran Housing Support.  “This was a forgotten neighborhood.  I welcome that someone is giving us residents a hand.”