GREENSBURG, Kan. — Residents here still have not recovered from the widespread damage caused by a powerful 1.7-mile-wide tornado that thundered dow 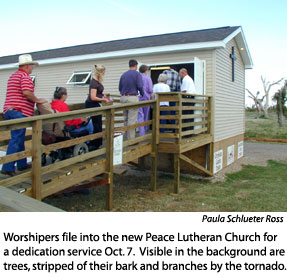 n Main Street last May 4, killing 10 people and destroying all 37 businesses and some 1,100 homes.

Most neighborhoods have no houses — just foundations and concrete driveways.  And most of those who’ve stayed here — about half of the 1,500 residents — now live side-by-side in mobile homes provided by the Federal Emergency Management Agency in a part of town known as “Femaville.”

But there are signs of rebuilding.  Greensburg city hall — though still housed in a temporary structure — has issued more than 200 permits for repairs and new construction, the city is replacing street signs, and all eight of the town’s churches that were reduced to rubble in the 200-mph winds are back in operation, including Peace Lutheran Church, a 50-year-old Lutheran Church–Missouri Synod congregation.

Although its building was demolished, the Peace congregation never stopped worshiping together.  First its 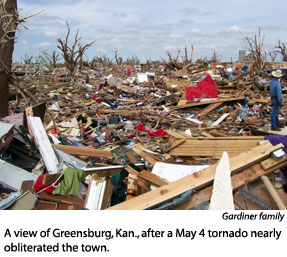 members met in a tent, then in the living room of an unscathed home on the edge of town, using a card table for an altar and folding chairs for pews.

“We’ve never missed a Sunday,” said Max Liggett, an elder.  “It was important to keep the church going.”

No members were killed, but 13 Peace families lost their homes, furniture, cars, clothing — all their possessions — in the deadly storm.

Chris Gardiner says he and his family “lost every material thing” they owned, but he is thankful to God because he still has “the important things” — his wife and children.

His priorities, he says, “have absolutely been realigned — with God and family at the top.”

In July, the family moved from a friend’s basement in Pratt, Kan., about 30 miles away, to a FEMA trailer back in Greensburg.  But even when they lived in Pratt, close to Our Savior Lutheran Church, another LCMS congregation, they drove the half-hour to Greensburg to worship with other Peace members because “there’s a connection here,” Gardiner said.

That “connection” was evident on Sunday, Oct. 7, when nearly 50 members of Peace and Our Savior, Pratt, plus a few guests, shook hands, hugged, s 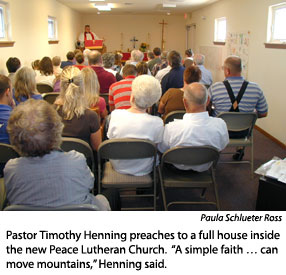 hared news, and laughed with one another as they arrived at 321 South Walnut Street for the dedication of a new Peace Lutheran Church building.

The modest, 14-by-52-foot modular unit — a gift from LCMS World Relief and Human Care and Orphan Grain Train — is located on the church property, right next to the concrete slab on which the former building had stood.

It is, says Pastor Timothy J. Henning, “a sign from God that Peace congregation is here to stay. … We want to maintain a Lutheran presence here, lifting high the Gospel message of Jesus Christ.”

“It’s good to be here,” Henning said at the beginning of the service.

“We give thanks for a new space for planning the work that God has for Peace to do,” he said.

The pastor blessed the new church — sporting a donated altar, pulpit, keyboard, and a couple of actual pews amid rows of folding chairs — and encouraged the congregation to “let your faith be wind-driven” as God uses them “to bring the seed of the Gospel into the hearts of many.”

Likewise, Peace Lutheran Church has ample opportunities to grow.  “We have all kinds of doors open to us now, that weren’t open before,” he said, mainly because residents “are looking to God more so now, since May 4, than before.”

A new town will bring new people, Henning said, and when that happens, the Peace congregation will be ready to reach out to them, inviting their neighbors 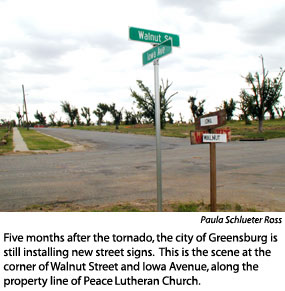 to experience God’s love, just as they have.

That love has enveloped the congregation since the tornado, according to the pastor.

“The love and mercy shown to us from throughout the Synod has been phenomenal,” he said.  LCMS World Relief and Human Care sent $30,000 “immediately,” which helped 16 families with emergency needs after their homes — and lives — were suddenly ripped apart.

Since then, some 400 LCMS congregations and other Lutheran groups also have sent donations.

“God’s been with us all the time,” said Peace member Stan Adolph, who rode out the tornado in the basement of his daughter’s home, which no longer exists.  He and his wife, Dolly, he said, are thankful that God protected them, their daughter, and two grandchildren.

The couple also is grateful that the Peace congregation has been able to worship together every Sunday since the storm, even though their “church” was, in fact, someone’s home.