LCMS World Relief and Human Care and its Baltimore-based relief and development partner, Lutheran World Relief (LWR), are appealing to U.S. Lutherans to send contributions for desperately needed emergency aid to Myanmar (Burma) in the 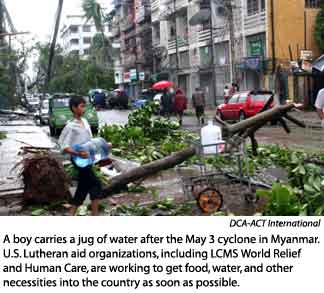 wake of the May 3 cyclone that has left an estimated 100,000 people dead or missing and up to a million homeless.

Reports from LWR’s aid partner, Action by Churches Together (ACT) International, indicate that water and electricity supplies have been cut to much of the country.  The full extent of the damage is still being assessed, but survivors are in dire need of food, clean water, shelter, and other basic items.

Aid from U.S. Lutherans will be distributed to victims through ACT and other organizations “with a significant presence in Myanmar,” according to an LWR spokesman.  Organizations outside the country are finding it difficult to deliver aid inside Myanmar, according to news reports.

Lutheran Hour Ministries (LHM) in St. Louis reported May 9 that its staff in Myanmar is OK and there has been no serious damage to the LHM ministry office there.  But “people are feeling so frustrated and hopeless,” a staff member wrote via e-mail.  Besides serious food and water shortages, prices of available items have increased by as much as 500 percent, and there is fear that diseases such as diarrhea, dysentery, and dengue fever may spread quickly.

Local LHM staff and volunteers in Myanmar have started needs assessment, and LHM’s area counselor for Asia, Gunya Na Thalang, will be traveling to the devastated country the week of May 11 to determine how LHM can help.

In telephone interviews May 7-8 with St. Louis radio stations KMOX-AM and KFUO-AM, respectively, Darin Storkson, regional director for Asia with LCMS World Relief and Human Care, described Myanmar as “an exceedingly closed and restricted country [which is] making it difficult for all types of organizations, such as ours, to work there.”  A “very, very small number” of international organizations, he said, have “an ongoing presence” in the country.

Storkson, who is based in Jakarta, Indonesia, said he has been trying to reach Lutheran contacts in Myanmar, but so far has been unsuccessful.

Storkson’s audio interviews are available on the Web site of LCMS World Relief and Human Care at http://www.lcms.org/?13439.

In spite of the current political situation that is limiting access to Myanmar, LCMS World Relief and Human Care says it will “do everything possible” through its partner, Lutheran World Relief, and LWR’s partner, ACT International, to supply aid to the cyclone victims in Myanmar. The Synod’s mercy arm also says that it “will work with the Lutheran church on the ground [in Myanmar], if possible, in addition to working through LWR.”

The Synod’s relief organization also says it plans to work directly with Lutheran partners in Myanmar “as soon as it is feasible to do so.”