The recently released report on findings of a survey on religious affiliation (U.S. Religious Landscape Survey, from The Pew Forum on Religion and Public Life) presents a varied 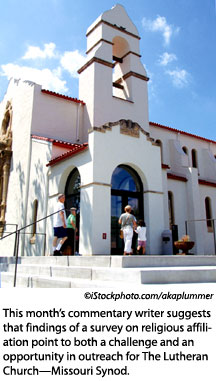 and dynamic picture of American organized religion. While some of the findings are rather startling, many are consistent with prior research.

For the full survey report, go to the Pew Research Center Web site, www.pewresearch.org. Under “Where to find,” click on “Religion and Public Life,” then on “The Religious Landscape of the United States” (where a report summary is located, and where viewers also can access findings by chapter headings), and finally on “View full report.”  Especially of interest are the findings under the heading for “Chapter 2: Changes in Americans’ Religious Affiliation.”

The proportion which the survey found to be “unaffiliated” (16.1 percent) is about twice the proportion reported 20 years ago in the General Social Survey (GSS), and is slightly higher than the 14.3 percent found in the 2004 GSS, making it the fastest growing category.

The good news is that more than half of those who were unaffiliated as children are currently affiliated with some religious group.  There is also some recent evidence that nearly a third of those who claim no denominational affiliation actually attend a congregation, according to the 2005 Baylor Religion Survey.

The major finding of the Pew Forum survey — that 44 percent of Americans claim a religious affiliation different from the one in which they were raised — generates a lot of discussion of “cafeteria religion” and “consumer mentality.”

What does this apparent high level of “religious mobility” tell us about organized religion in America?

In no particular order, following are several reasons identified by other research for why people change their religious affiliations:

There are other, perhaps idiosyncratic (or tragic) reasons people leave one religious affiliation for another.

The point is, with all of this mobility, one can either view religious life in America as a glass “half full” or “half empty.”  Is religion in America “vibrant” or “threatened”?

A nation of ‘seekers’

The fact that Americans choose to switch religious affiliations should hardly come as a surprise.  Our nation was founded by individuals willing to leave their home countries, largely to seek religious freedom from “established” or “state” churches. They fled an “ascribed” affiliation to one of “choice.”

And, with more than 200 denominations or faith communities, Americans have plenty of religious “choices.” Even a majority of the “unaffiliated” eventually affiliate with some religious group.

What the recent Pew Forum research reveals is a varied and complex national faith journey being traveled in new and ever-changing ways, from small local congregations, to mega churches; from store fronts and house churches, to “virtual” congregations and online chat rooms.

With all this volatility comes “winners” and “losers,” denominations or faith groups who gain more members than they lose, and vice versa.

The biggest gains have been among those who say they are not affiliated with any particular religious group. Another group that shows a net gain is nondenominational Protestants.

Unfortunately, Lutherans have experienced net loss, even though they have done better at retaining their members than most other Protestant denominations (60 percent of those who were raised Lutheran were still in their denomination at the time of the survey).

The latest Pew Forum survey on religious affiliation points to both challenge and opportunity for The Lutheran Church–Missouri Synod. The challenge is to reach out in innovative, contextually relevant ways to an increasingly diverse, growing population with confidence in the power of the Gospel and the Holy Spirit.

The opportunity is clearly present in the 16 percent of the adult population currently “unaffiliated.”

Dr. John P. O’Hara is senior research analyst for the Research Services Department of the Synod.