LCMS Pastor Marty Marks was comforting students within minutes of the Valentine’s Day shootings at Northern Illinois University (NIU), DeKalb, that left six people, including the gunman, dead and 18 wounded.  None of the victims 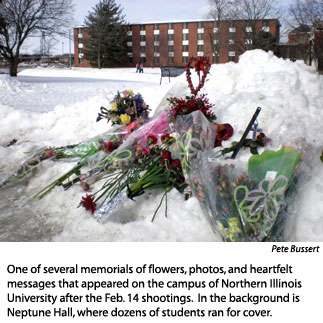 are believed to be members of LCMS congregations.

Marks, senior pastor of Immanuel Lutheran Church, DeKalb, and NIU campus pastor, ran from his church office to Neptune Hall, a residence hall next to Cole Hall, where the shootings took place, when he heard about the incident from a staff member and saw rescue vehicles arriving.

Coincidentally, the pastor had lived in Neptune Hall when he attended NIU from 1988 to 1992.  Immanuel Lutheran is located, he said, “right in the heart of the campus.”

After the shootings, “I found myself in the midst of students who were fleeing from Cole Hall, bloody students everywhere, the police just starting to arrive, saying, ‘What’s going on?  What do we know?,'” Marks told Reporter Feb. 18.  The past four days, he said, “have been an absolute blur.”

One female student the pastor consoled early on had seen her best friend shot — “she was pretty sure her friend was dead,” he recalled — and “was hysterical.”  But the student was able to provide a valuable eyewitness account to police during a chaotic time, according to Marks.

The pastor helped police and school staff “round up those who could make statements to the police” and “did a lot of counseling, praying, sitting, talking” with about half of

the 60 to 70 students who had taken refuge in Neptune, assuring them that “we’re going to get through this together” and “you’re not alone.”

But he dispensed more hugs than words, he said.

“We don’t have to be defined by this event,” but rather, “our response can really be the definition of who we are,” said Marks.

One way God is present on campus, he said, “is through us — are we going to be His presence to love and care for this community?”

Giving hugs is one way of “expressing the Gospel in the midst of all this — words fall way short,” he said.

At this writing, the campus is pretty much empty, since most students “wanted to go home and hug mom or wanted to go talk to their friends,” according to Marks, and they won’t be back until classes resume Feb. 25.  Counselors will be available in every classroom, he said.

In the meantime, the pastor is telling callers who want to help to “send lots and lots of prayers,” but nothing else 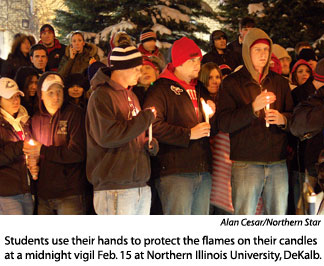 at this time.  “The love and support that everyone’s sending is wonderful and appreciated.”

In a message posted on the Web site of the Synod’s Northern Illinois District, President Dan Gilbert thanked those “who have been praying for the wounded and their families and for the families of those who lost their lives in this tragedy.”

Gilbert acknowledges the response of Marks and DCE Tim Hetzner, president of Lutheran Church Charities, Addison, Ill., who is coordinating a team of crisis counselors, and Lutheran Child and Family Services of Illinois, which has provided an online resource guide for pastors and has arranged to have counselors at several area Lutheran congregations to assist NIU students and their families.

“Thank you again for your prayers and support,” Gilbert’s message reads.  “In times of sorrow we remember the words of our Lord and Savior: ‘In this world you will have trouble.  But cheer up, I have overcome the world’ (John 16:33).”

Board actions support schools, other ministries