Rev. David Muench says he’s “thrilled and encouraged” by three positive things that new pastors have identified about their participation in the Commission on 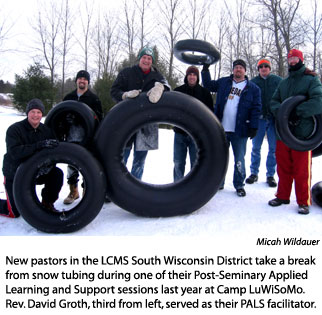 “They are right in line with the commission’s goal to strengthen relational vitality among church workers,” said Muench, executive director of the CMGS.

Those positive aspects surfaced in key findings of a telephone survey last fall among a sampling of pastors who graduated from Synod seminaries between 2000 and 2003.

Specifically, the survey found that for those who participated in the PALS  initiative  — designed to help new pastors make a smooth transition from seminaries to congregations –- the three most-positive aspects of their PALS experience were:

As a result of those positive findings, Muench told Reporter that he and a PALS Development Action Team see the focus of PALS groups “shifting from primarily studying topics and discussing theoretical approaches to using topics and approaches as a structure for developing and strengthening healthy relationships. The topic isn’t the only goal, but rather provides the opportunity to interact, so that the goal more intentionally includes the development of appropriate, cordial, collegial relationships.”

“The survey confirms that as a very healthy outcome from our PALS pastors’ gatherings,” Muench said.

PALS grew out of a 1995 Synod convention resolution that called for new continuing education programs for pastors.

A PALS group is typically made up of five to 12 recent seminary graduates who meet for weekend sessions — led by a facilitator — the equivalent of six full days each year, for three consecutive years.  Pastors’ wives accompany their husbands for several of those sessions, to similarly aid their transition from seminary life to the congregational setting.

Those who complete the program receive continuing-education credit.

Since the CMGS’ PALS program started in 1998, some 900 first-call pastors and their wives have participated in PALS.  This year alone, 45 facilitators are leading groups.   Funding for the initiative is shared by the Synod, districts, the new pastors’ congregations, and those pastors.

“These pastors, their wives, and facilitators are faithful in dedicating their time to come together for the PALS sessions,” said Judy Voelz, coordinator for PALS on the CMGS staff, and who serves with Muench on the eight-member PALS Development Action Team.  The team is one of six action teams that “assist in pursuing critical targets of the commission,” according the Muench.

On request, Voelz sends the PALS facilitators videotapes, workbooks, and other material prepared by the CMGS, giving them a choice of several “core topics” and an array of elective topics for study and discussion during sessions.

Currently, those core-topic choices are “Pastor as Shepherd” and “Pastor as Preacher/Teacher.”  Electives cover such topics as addiction, adult catechesis, biblical family counseling, ministry to the developmentally disabled, recognizing depression and getting help for it, and financial management.”

“In my estimation, I don’t think our new pastors need more study and paper documents about topics or theoretical approaches on subjects that they may have covered in their seminary education,” Muench said.  “What they appear to find valuable is application of the things they already know to relationships –- dealing with real people in real-life situations.  That’s where I think PALS can be very helpful, and it’s where the PALS action team and the CMGS now want to concentrate efforts.”

Instead of devoting study or presentation time in the schedules of PALS sessions, he said that he and Voelz are looking for ways for PALS participants to review material prior to their sessions -– perhaps via Web streaming.  That would allow more time for “interacting around the material and strengthening relational vitality in those sessions,” Muench points out.

Since the PALS survey results were made available in December, Muench said that he and Voelz also have been considering “realignment of PALS to include some specific relational efforts that would support the research” — in areas such as prayer and spiritual disciplines, self-awareness, personal understanding of gifts, and team building with lay leaders.

The PALS survey interviews were conducted by a national research firm.  Dr. John O’Hara of the Synod’s Research Services Department and the CMGS staff developed the interview material.

Muench told Reporter that although other PALS surveys have been conducted over the years, last year’s was the most comprehensive, and the first to involve an independent researcher.

In addition to identifying the top three most helpful aspects of PALS, other key findings of the survey, as reported in an executive summary, include the following: