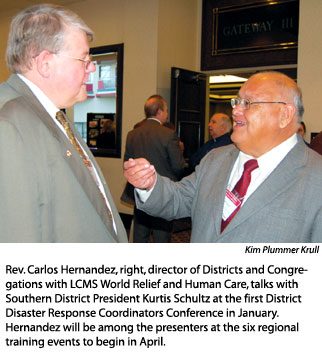 Districts are hosting the first-time sessions primarily for members of newly organized District Disaster Response teams. The first event is set for the Southern District, April 29-30, in New Orleans.

“These teams are essential to the LCMS disaster-response plan, which will empower and enable districts, congregations, and LCMS World Relief and Human Care to respond to disasters in a more efficient and effective manner,” said Rev. Glenn Merritt, director of Disaster Response with LCMS WR-HC. “While state and national relief efforts are being mobilized, the church will have an opportunity to reach out and minister to those in need.”

Along with Merritt, Rev. Carlos Hernandez, director of Districts and Congregations with LCMS WR-HC, and Rev. Ralph Buchhorn, president of Extra Mile Ministries, will be among the presenters at each training session.

The regional events follow the first District Disaster Response Coordinators Conference, hosted in January by LCMS WR-HC, which took the lead in developing the disaster-response concept.

Regional training sessions will include sections on developing:

Two other regional training sessions are in the works, tentatively planned in the South Dakota and Missouri Districts.